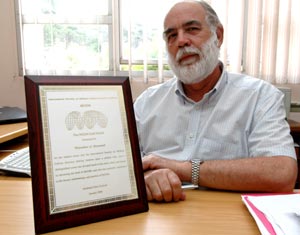 Lacing up: Lauren Stewart has become the first UCT medallist at an SA road championship in more than a decade.

All on the QT, the Athletics Club has chalked up some noteworthy results over the past couple of weeks.

Like at the Comrades Marathon on 16 June when Andrzej 'AO' Okreglicki was the club's only finisher - for the second year running - clocking a time of 8:56:59.

The following weekend, at the fifth cross-country league at Koeberg, the women's 8km senior team of Amy Aronson, Ineke Nel, Nicole Benjamin and Nicky Collins won their third race of the season. Aronson was third, Nel - still a junior - came in fifth, while Benjamin and Collins finished seventh and eighth, respectively.

Aronson currently leads the league's individual standings, and the women's squad tops their section as well. There are two more league races left for the season, on 21 July and 4 August.

Aronson recorded another milestone when she finished third in the Eerste River 15km on 30 June, clocking the fastest time over the distance for a UCT woman since September 1999.

The very next day, the club's Lauren Stewart, running in Western Province colours, finished fourth in 85:09 at the South African Half Marathon Champs in Durban. In so doing, Stewart became the first UCT medallist at a national road championship in at least 15 years.