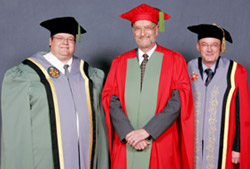 Professor Johann Lutjeharms once joked about the number of scientific plaudits he's collected in recent years. Here's another: a Doctor of Science (honoris causa) from the University of Pretoria (UP), honoring his long contribution to oceanographic research.

Lutjeharms was one of the founding members of the South African Society for Atmospheric Sciences and a strong supporter of the establishment of a meteorology training component at UP.

The A-rated scientist received a similar recognition from Rhodes University last year, honoring his long collaboration with their marine scientists. He was involved in the Southern Ocean Group at Rhodes for more than 25 years.

From the Royal Society of South Africa's (Lutjeharms is a Fellow) website: 'Professor Johann Lutjeharms is regarded as the leading physical oceanographer in Africa, having researched ocean currents from Antarctica to the tropics in the Indian and Atlantic Oceans ... He has published his research in four books, 23 book chapters and 250 articles in international scientific journals.'

In his graduation address Lutjeharms said that The Economist had included eight American universities among the world's best 10 institutions. The reason for this predominance, he said, was the freedom they enjoyed compared to European institutions, which are controlled by the state.

'And even more so in South Africa where a university cannot even implement new courses without state approval.'