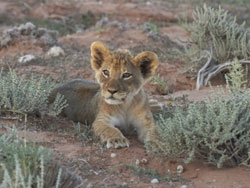 The winner: Jennifer Eidelman's photograph of a lion cub in the Kalahari will be featured in a calendar to be handed to delegates at an upcoming international conference.

Love of photography has paid dividends for two UCT librarians after their pictures were selected for an international conference.

EBSCO Information Services will exhibit the pictures, "taken for fun", by Marilyn Smith, manager and training librarian at the Knowledge Commons, and Jennifer Eidelman, the librarian at the Department of Molecular and Cellular Biology, at the annual conference of the International Federations of Library Association. This will be held in Durban in August.

The company initiated a competition for local librarians to promote attendance at the conference. Selected photographs will be featured in the company's 2008 calendar, which will be distributed to delegates.

"I took those pictures for fun and I was quite surprised when I heard one of them had been selected," said Eidelman.

Smith began taking pictures at the age of 10. Two of her images were selected for the exhibition that formed part of UCT's 175th anniversary celebrations. Her staff insisted that she enter the EBSCO competition - but she did so only at the last moment.

"I chose those pictures in such a hurry that I can't even remember which photos I entered," she says.