Too black for white, too white for black 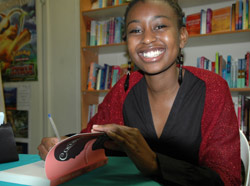 Inside out: Kopano Matlwa's first novel Coconut was launched on 6 June.

Matlwa's book, Coconut, tackles the question of black youngsters growing up in formerly white neighbourhoods, attending Model C schools and taking on that well-modulated Model C accent. Their black identities are assailed and the narrator, Ofilwe, struggles to find herself, unsure of where she belongs.

'I started writing Coconut three years ago,' Matlwa says. Why, though? With a velvety Model C accent herself, Matlwa admits that she is a product of the new South Africa. 'Westernisation affects us all,' she says. 'There are so many African boys and girls who know nothing about their culture. There is so much richness in what is African. Someone just had to write about it.

'And if it gets people thinking, then that's a good place to start.'

But, one has to ask, doctor or writer?

'I've managed to write in my spare time. I hope I wouldn't have to choose,' she says.

And all the better. She obviously has a double whammy of talent.