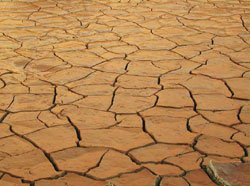 Dry times: The most recent IPCC report makes it clear: we've entered the age of climate-control.

Now's the time for action, says the Intergovernmental Panel on Climate Change in a new report

Global greenhouse gas (GHG) emissions are increasing rapidly, and immediate action is required to avoid the more severe consequences of global warming. A wide range of measures is available to achieve this.

So says the Working Group III report of the Intergovernmental Panel on Climate Change (IPCC), the international body founded by the World Meteorological Organisation and the United Nations Environment Programme to look into the scientific underpinnings of climate change. UCT's Harald Winkler, programme leader of the Energy Research Centre's programme on Energy, Environment and Climate Change, was a lead author of the new report, the third released by the IPCC since February. The report deals specifically with greenhouse gas mitigation, or how countries can reduce GHG emissions.

Globally, the latest report says, GHG emissions must peak and drop over a short time-frame to reduce the risk of dangerous climate change. Large systems need to start changing fundamentally in the next decade or three. Currently, the concentration of GHGs in the atmosphere is still rising. The key is to halt this rise so that the concentration of GHGs reaches a peak, and then, with further emissions reductions, begins to stabilise GHG concentrations in the atmosphere. Simply put, the sooner and lower the peak, the lower the future increase in temperature is likely to be.

"Taken together, the [IPCC] reports make it clear that climate change is real and that the costs of inaction far outweigh the cost of action," says Winkler.

Up to three-quarters of this increase in annual CO2 emissions is projected to come from developing countries. "While emissions per capita are substantially lower in most developing countries than industrialised countries, this is not true for South Africa, with its coal-dependent economy," said Winkler. He adds that while the IPCC would not comment on what any single country must do, the conclusion seems inescapable - South Africa must reduce its emissions. And do so fast.

However, the country is currently facing a rising demand for electricity generation capacity, underlined by the power outages in Cape Town last year: "If at least some of the rapid growth in capacity does not come from cleaner sources than coal, we're in deep trouble," says Winkler.

Green technologies are already out there, according to the report. "The challenge here is to deploy them at greater scale – and to bring emerging technologies into operation." All the while, the country must invest in research for low-cost, zero-emissions options in all sectors.

There is no single solution, though. The IPCC report stresses the importance of a portfolio of technologies, as well as changes in behaviour and lifestyle, and using less more effectively.

The Working Group III report follows on the Working Group I and II reports, released in February and April respectively. The Working Group I report, on which Professor Bruce Hewitson of the Climate Systems Analysis Group in the Department of Environmental and Geographical Sciences was a co-ordinating lead author, confirmed that the international scientific consensus was that human impact on global climate was now "unequivocal".