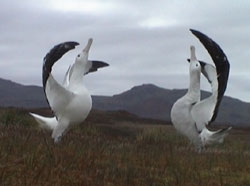 Birds of a feather: The Prince Edwards Islands form an important breeding ground for Wandering Albatross. The islands have been declared the first sub-Antarctic Ramsar site, one of two named on International Biodiversity Day. (Photo courtesy of the ADU.)

Tuesday 22 May was International Biodiversity Day and South Africa did something rather special, notes the Avian Demography Unit's (ADU) Professor Les Underhill.

The most important reason for nominating the Prince Edward Islands is the peat bogs, a result of seabird guano.

South Africa has now designated a total of 19 Ramsar sites, covering a surface area of 543 978 hectares.

'Nominating the Prince Edward Island as a Ramsar site was originally the brainchild of the ADU's John Cooper,' Underhill said.

It's the first Ramsar site in the sub-Antarctic and besides Cooper, the ADU is also linked to the islands through lecturer Dr Marienne de Villiers and her PhD student Mariette Bause.

Ramsar's Africa regional team, Abou Bamba and Evelyn Parh, have said the sub-Antarctic site serves as an example for other parties with island territories at that latitude.

Three penguin species also breed and moult on the rocky areas around the coastline.