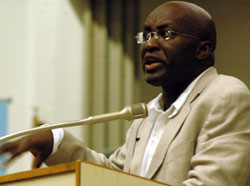 The campus has been astir with talk of transformation and respect over recent weeks. Prof Achille Mbembe from Wits added his thoughts to discussions last week

"Equality does not mean equal distribution of everything to everyone. It means the equal treatment of everyone and the granting of the same weight to everyone," Professor Achille Mbembe told a UCT audience on 15 May.

His address, Black Victimhood, White Melancholia: The paradoxes of transformation in South Africa, is part of the Respect campaign, which is intended to boost the culture of courtesy and mutual respect critical to transformation at UCT.

Mbembe said recent discussions on issues of race and transformation at UCT reflected a richness in debate at the institution on a "difficult and complexity issue" for which there are no simplistic solutions.

Nonetheless, he warned against turning transformation into a purely managerial, quantitative exercise, where, in the higher education sector, it would be reduced to simply ensuring adequate numbers of blacks and women found places at universities.

"Transformation epitomises more than another post-apartheid project. We have to overcome whiteness and blackness in order to build an Afropolitan society."

He said issues of race had turned the transformation debate into an acrimonious one.

"I think persistent denial of white privilege partly explains it and so does the form of black identity built on the idea of victimhood.

"Transformation is a dangerous but necessary tool and we have to be vigilant about its ethical and practical implications."

He added that cross-racial and ethical consensus had to be built around the project.

"We must also restore capabilities, and education is one such capability."

Mbembe said real freedom was freedom from race where the colour of skin would not determine status, dignity, rights and obligations.

"It could be South Africa's unique gift to humanity."

Mbembe is a research professor in history and politics at the University of the Witwatersrand and a senior researcher at the Wits Institute for Social and Economic Research.