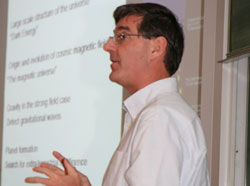 On 14 May, UCT hosted a colloquium by Professor Peter Hall, project engineer on the international Square Kilometre Array (SKA) telescope, which, when completed in 2020, will be the biggest radio telescope in the world.

In his colloquium, Hall, a researcher at the Australia Telescope National Facility (ATNF), outlined the project's design space, technological needs and opportunities for involvement over the next few years. The project currently involves 15 countries, including South Africa.

With a collecting area of approximately one square kilometre, the SKA radio telescope will be 50 times more sensitive than current instruments. It will allow astronomers to see the formation of the early universe, including the emergence of the first stars, galaxies and other structures. This will shed light on the birth and eventual death of the cosmos.

South Africa and Australia are the two shortlisted candidates for the core of the array. A final decision on the site will be made in 2008 or 2009. The project is expected to cost US$1.6bn (R11.1bn).

Construction is scheduled to begin in 2010, and initial observations should be possible in 2015.

Also on 15 May and as part of the day's events, , international SKA director, gave an update on the project at a lecture at the South African Astronomical Observatory in Observatory.