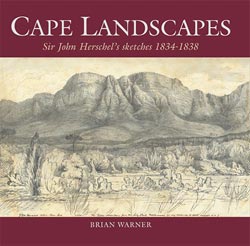 Emeritus Professor Brian Warner's new book is a companion to Flora Herscheliana in that it adds the landscape drawings of Sir John Herschel to the water colours of Cape flowers previously published.

Herschel travelled from England to the Cape of Good Hope between 1834 and 1838 to catalogue the stars of the southern hemisphere. His father, the eminent astronomer Sir William Herschel, had done a similar exercise for the northern skies.