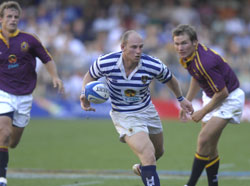 Loosing grip: Ashley Wells struggles to hold on to the ball in UCT's 23-36 defeat to Stellenbosch in the intervarsity on Saturday, 5 May, played at Newlands.

The FNB UCT First XV let a golden 13-point lead slip through their fingers in their annual intervarsity against the University of Stellenbosch, played at Newlands on Saturday, May 5.

Three penalties and a goal saw a pumped-up UCT surge to a 16-3 lead 20 minutes into the game. A late try by Maties cut UCT's advantage to just six points (16-10) by halftime, however.

Maties turned the game on its head with a quick-fire four tries in the second half, wrapping the game up well before the final whistle. UCT scored a last-minute consolation try to give some respectability to the scoreline, 36-23 in Maties' favour.

'We had the game for the winning in the first 20 minutes,' admits UCT captain Kevin Foote, 'but lost concentration and let it slip.'

But the season's only just getting going. UCT now lies second on the Super League log, six points behind Maties.

'We have one game in hand over the Maties, and there are still many more to play,' Foote says.