A break with tradition 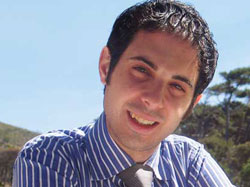 For Salim Nakhjavani, taking up the wardenship at UCT's new GraÃ§a Machel Residence was like going from nought to 100km in a nanosecond.

Or, in this case, from no children to over 382 of them. And they're all girls - or "First Ladies", as they like to be called.

There's a precedent being set here. Nakhjavani is the first male warden of a women's residence at UCT.

Not only that, down the road at College House and Kilindini, Chao Mulenga has unpacked her trunks and rolled up her sleeves. She's the first female warden of these male bastions. At 120-years old, College House is the grandfather of the university's residences.

A lecturer in the Department of Public Law, Nakhjavani's last posting was at the International Criminal Court in The Hague. He and his wife, Naseem, a paediatric registrar at the Red Cross War Memorial Children's Hospital, recently moved to South Africa.

Coming to South Africa with his wife was an important choice, says Nakhjavani.

Nakhjavani believes a university residence should be as much of a community as possible. And although the GraÃ§a Machel Residence had some teething problems initially, things have gelled. Students held their first high-table dinner last Thursday night and the residence has adopted its own constitution, unanimously but not without a lively debate.

With building work still on the go, security has been strict. No male callers are allowed, something Campus Protection Services has taken seriously.

Zambian-born Mulenga doesn't see anything unusual about her posting at a men's residence. It's in line with the university's transformation initiative, she says.

"Leadership has little to do with gender," she reminds us.