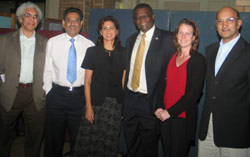 South Africa will have to produce scores more doctoral graduates if the country is to become part of the knowledge economy, said National Research Foundation president and chief executive officer, Professor Mzamo Mangaliso.

Mangaliso was guest speaker at a celebration of UCT's seven national research chairs and the university's newly rated scholars on 23 April.

UCT secured seven of the first 21 National System of Innovation research chairs, established in strategic research areas at the country's universities. The chairs form part of the Department of Science and technology's new South African Research Chairs Initiative (SARChI), which will attempt to reverse the country's decline in research output.

That decline was very much on Mangaliso's mind when he spoke. He said that for a population of 47 million, the country produced 1 150 PhDs a year, way below the international benchmark. Every year South Korea, for example, produces 100 PhDs for every million people.