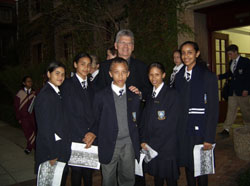 Richard Daly, Principal of Settlers High School, with his grade 8 team outside the Mathematics Department.

About 6 000 pupils from 130 Western Cape high schools piled into 50 venues on campus for the 30th UCT Mathematics Competition, held on 24 April.

The competition, aimed at sparking secondary-level development in maths, an invaluable skill to most areas of study, is sponsored jointly by the Faculty of Science and the Faculty of Engineering & the Built Environment. Africon Engineering International also donated R30 000 towards the event. Prizes are sponsored by Casio and Oxford University Press.

In the build-up to the competition UCT hosted two programmes for grades 11 and 12 pupils on 10 and 17 March. After the competition, top individual performers will be invited to take part in a new event, the UCT Invitational Mathematical Challenge, in May. Based on this, the most promising candidates are invited to join the UCT Mathematical Circle.

In September there is also an Inter-Provincial Mathematics Olympiad. This maths competition is a deciding factor in who represents Western Province and Boland.