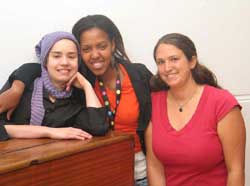 Outreach: Dominika Jablonska, Lendy Swartbooi and Ali Yannias are using their talents to reach out to a local commuinity.

She's referring to social and educational outreach programmes that are beginning to filter into the city's poorest communities. But not Ravensmead. It's easily one of the city's darker places, rife with alcoholism and drug abuse.

Swartbooi grew up there. She understands what it's like to feel hopeless. Ironically, it's hope that's taken her back to her old school, Nebo Primary, with a band of UCT students who form the Educational Theatre Outreach Project.

They're a multi-disciplinary group from various faculties on campus. From Chicago, Yannias is here to research the Truth and Reconciliation Commission. She's worked with children in Mexico - with similar problems to South Africa - and elsewhere.

"Living here is an experience in itself."

Each Saturday for the next few months the team will travel to Nebo Primary to teach 40 children about theatre, drama and its application in the real world. This is the first phase of the project. The children will have an opportunity to write and workshop their own material.

At the end of the programme they will stage a full-length play at the school, one they will have created and workshopped. The team plans to take the production to a drama festival.

Already, there's evidence of talent. One girl, a shy child in a uniform that is unravelling, got up and sang.

"She has a voice," says Swart-booi.

These are children who have never been inside The Baxter, or Artscape. Or even a school hall. When the UCT outreach group arrived at the school to introduce their programme, the children had assembled outside in the cold.

It's this that spurs Swartbooi and her team.

"We can show them the world does offer different realities to theirs," says Jablonska.

There's a temptation to want to do more when they see children without shoes and jerseys, absent from school and selling tik on street corners.

"We're not going to fix the community, but we can be useful and help in some small way," Yannias said. "Focus on what you can be and not on all the things you can't."

For the moment, Swartbooi wants to keep hope alive. The workshops will teach other aspects, like leadership. Importantly, it's an opportunity for these youngsters to tell their own stories through performance.