Plethora of publications from languages and literatures

Several new titles have come from the School of Languages and Literatures' stable, demonstrating the breadth of disciplines in the school.

Dr Yasin Dutton (Arabic section) has produced Original Islam: Malik and the madhhab of Madina, part of Routledge's Culture and Civilisation in the Middle East series. Original Islam provides access to a hitherto little known area of Islamic law, investigating the primacy of Madinan Islam and the madhhab (school of law) of its main exponent, Malik ibn Anas. The work provides a comprehensive section on the scholarly credentials of the eighth-century Madinan jurist Malik ibn Anas and a detailed examination of a number of disputed legal issues.

Dr Clive Chandler's (Classics) Philodemus on Rhetoric Books 1 and 2: Translation and Exergetical Essays is part of Routledge's Studies in the Classics series and is the result of Chandler's UCT doctorate. The Epicureans were reportedly notorious for denigrating most forms of civic participation and for rejecting those cultural activities broadly labelled paideia. The publisher notes: "In contrast, Philodemus, the philosopher-poet who lived and wrote in Italy in the first century BC, presents an interesting case. For a substantial portion of his surviving work is preoccupied with investigations into this paideia and with demonstrating how an orthodox Epicurean is to approach them. This book selects one of those investigations, the first two books of Philodemus On Rhetoric. The work constitutes a helpful guide to this fragmentary and difficult text." 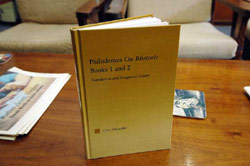 Following years of research, Wilhelm Snyman (Italian and German) and Guiseppe Stellardi, chair of Italian at Oxford University, have translated a "very difficult" text, Carlo Michelstaedter's Persuasion and Rhetoric, into English for the first time. Michelstaedter committed suicide after completing his "devastating treatise" (his university thesis) on the human condition and the course of Western civilisation. Nonetheless Michelstaedter's work provides a "pithy - albeit idiosyncratic - synthesis of the major currents of philosophical thought that held sway at the beginning of the twentieth century". 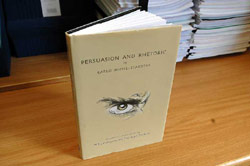 Professor Dave Wardle's (Classics) commentary on Cicero: On Divination Book I, published by Oxford University Press, is the first one that is accessible to the reader who knows no Greek or Latin. The publisher notes: "Cicero's treatise On Divination provides the fullest discussion of the various phenomena of divination in the Greco-Roman world and of the arguments formulated for and against its efficacy. This new translation and extensive commentary (the first in English since 1920) provides a current and comprehensive guide to ancient debates on divination, to the philosophical arguments in favour of it and to the latest scholarly assessments of Cicero's work." 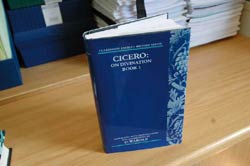 Professor Etienne van Heerden's (Afrikaans) most recent translations are the Dutch translation of In Stede van die Liefde and the Russian and Greek translations of The Long Silence of Mario Salviati. On the Dutch In Stede van die Liefde the influential Belgian journal Knack wrote: "That he is currently one of the prime story-tellers of contemporary world literature, the South African writer Etienne van Heerden demonstrates once again in his opulent new novel In de Plaats van Liefde." 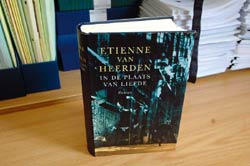 Prize-winning poet Professor Joan Hambidge (Afrikaans) has published a new anthology, Dad (Genugtig! Uitgewers). Dad is a volume of Hambidge's poems published about her father since her debut in 1985 (Hartskrif) and poems written after her father's death. "My relationship with my father, Afrikaans versus my father's English world, is assessed in the poems." The anthology has received wide critical acclaim. Hambidge, who is also a novelist and critic, has published 20 volumes of poetry. A selection, Die Buigsaamheid van Verdriet, was published by Protea in 2004. 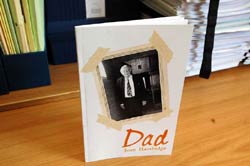