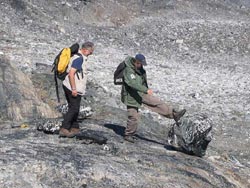 A fragment of ancient seafloor, a serendipitous find by a team of international geologists in remote southwest Greenland, shows evidence that Earth's crustal plates were shifting as far back as 3.8 billion years ago.

The team's observations, printed in the 23 March edition of Science, indicate that this tectonic activity began before any known structural geological record of Earth, and provides new clues to understanding Earth's geochemical evolution.

Evidence, in the form of the oldest preserved pieces of the Earth's crust, near Nuuk, where a rare outcrop in the Paleoarchean Isua Supracrustal Belt is found to constitute an ophiolite - ophiolites being pieces of ancient "fossilised" seafloor that formed at oceanic spreading centres - dated between 3.7 and 3.8 billion years old. This is more than one billion years earlier than the oldest previously discovered ophiolite in China, says UCT's Professor Maarten de Wit of the Department of Geological Sciences. De Wit was on the team that spent two weeks scouring the area, "a Mecca for researchers who study the world's oldest rocks".

Researchers had been unable to determine the beginning of plate tectonics, colossal movements of the Earth's outer shell that explain how oceans and continents were formed.

The team's finding is significant, pushing back the date of plate tectonic processes to an era far closer to Earth's conception 4.5 billion years ago.

"Since the plate tectonic paradigm is the framework in which we interpret all modern-day geology, it is important to know how far back in time it operated," said co-author, Professor Minik Rosing of the University of Copenhagen, as reported in BBC News.

Fortuitously, the normally fractious weather played along, clear conditions helping them find the sheeted dike complex, considered to be the crucial component of ophiolites, in a brooding landscape dominated by black basalt. Though the rock samples were dated in England using a uranium lead process, UCT will soon be able to do this kind of work, thanks to a R20-million purchase of three state-of-the-art instruments acquired by the African Earth Observatory Network (AEON). AEON is an international initiative to train African scientists to develop "robust Earth stewardship models".

In 2004 De Wit co-authored another Science paper with team member Professor Harald Furnes, documenting how microscopic organisms, smaller than the width of human hair, had eaten their way into similar rock in the 3.5 billion-year-old Barberton Mountain Land of Mpumalanga to form long, worm-like tubes.

The finding proved that the microbial processes we see today also occurred at the earliest stages of Earth's history, close to the origins of life on earth.

The work in Greenland is an attempt to push that date back by another 300 million years.