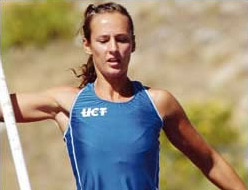 UCT pole vaulter Sylma Jordaan took the first UCT senior national track and field title in at least 25 years when she jumped for gold at the South African Senior Track and Field Championships in eThekwini, Durban, in late March.

Even with a full field, including jumpers who had cleared four meters before, Jordaan's jump of 3.5m was good enough on the day.

"They just didn't clear the bar, and she did," said James Evans, UCT athletics club coach.

And although the national standard denotes a higher jump, Jordaan's on her way up. Her personal best is 3.85m on the record. And she has recorded '“ during practice '“ a jump of 4.10m.

"I would like to jump what I do during practice; it's all about improving a little every day," says Jordaan.

The win was a big confidence booster for her. The challenge, says Evans, is for her to win again next year, a feat few pole vaulters have managed.