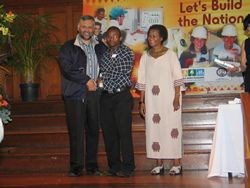 Scores of Cape Town engineering university students received a financial leg-up when they were awarded bursaries on Saturday, 17 March.

Of the 207 bursaries awarded by the new Masakh'iSizwe (Let's Build the Nation) programme, 73 went to UCT.

The Masahk'iSizwe initiative was established last year by the Western Cape Department of Transport and Public Works to address the skills shortages in the transport and built environment fields.

Former UCT vice-chancellor and chairperson of the Masakh'iSizwe Advisory Board, Dr Mamphela Ramphele, said lack of engineering skills was a "fatal constraint", holding back the prosperity of the country.

She said this constraint was one of the ghosts haunting our democracy, and that South Africans needed to free themselves from it.

UCT Vice-chancellor and Principal, Professor Njabulo S Ndebele, said the centre represented a partnership between the government and higher education. He promised that in addition to financial aid, the students would also be mentored.