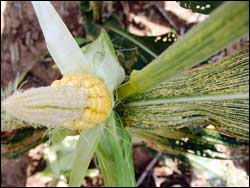 Harvest time: Much is on the line for a genetically modified crop of maize developed by UCT scientists.

From the 12 January edition of the prestigious Science magazine (Vol 315) comes news that Africa is gearing up for its first trial of a genetically modified crop, developed entirely in Africa by UCT's Professors Jennifer Thomson and Ed Rybicki and their team in the Department of Molecular and Cell Biology.

Endemic to Africa and nearby Indian Ocean islands, the maize streak virus (MSV) is carried by the leafhopper (Cicadulina mbila), manifesting as minute, pale circular spots on the lowest exposed portion of the leaf. Plants infected at an early stage become severely stunted, producing undersized, misshapen cobs or no yield at all.

Considering that maize accounts for 50% of calories in local diets, virus-resistant maize would make an important contribution to grain provision.

For the past 25 years African crop scientists have been trying to produce virus-resistant maize by crossing plants that carry natural resistance, but with limited success.

Postdoc Dionne Shepherd, who has worked on the project for nine years, says field trials are crucial to test environmental and health risks. If all goes well, though, this will be the country's first GM crop to be field-tested at home.

And with government now developing its own expertise to evaluate environmental and human safety, they're keen to use the UCT maize, the most advanced locally produced GM product, as a guinea pig.

As UCT's maize was home-grown without big corporate bucks (Pannar was the only corporate contributor), the UCT scientists hope to shake off some of these criticisms.