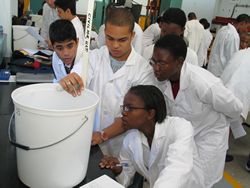 The first-year class is over 100-strong (including extended programme ASPECT students), a substantial increase over previous years' intakes.

The present boom is being mirrored at other institutions, says the Department of Civil Engineering's Professor Mark Alexander.

There is no doubt this trend can be linked to the buoyant state of the construction industry and the country's focus on infrastructure development, with substantial funds being made available for this work.

'In my view, students are being attracted by the possibilities offered by industry as well as the roll-out of flagship projects such as soccer stadiums for 2010, the Gautrain and airport expansions.'

'Interestingly, our stats show an identical up-tick approximately 30 years ago, when the country was undergoing its last major construction boom, with comparable flagship projects such as major freeways and bridges, downtown developments, new power stations, and so on.'