SA equipped to take the lead 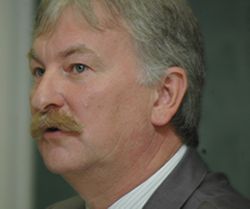 The newly appointed French ambassador to South Africa, Denis Pietton, delivered his first public address at UCT on 13 March, emphasising the similarities between the two sovereign states and encouraging South Africa to take on a leadership role in Africa.

'We have much in common, we share the same aspirations, like liberty, freedom, fraternity and equality for our people and the world,' Pietton said. 'There is a lot of fascination about what is going on in South Africa. Is South Africa a model for Africa, or an exception?'

But the challenge for South Africa is to eliminate poverty, he said.

Pietton said the multi-polar nature of the world creates a problem with legitimacy at the United Nations. This can be solved through better representation of countries, including African countries.

'There is a 5% to 6% growth rate in Africa,' he said. 'It would be foolish to not want a more unified Africa. When you are united you are stronger. And greater stability in Africa would create the right conditions for development.'

Moreover, it is South Africa that can lead African countries toward a more unified continent, he said.