Get up and dust yourself off 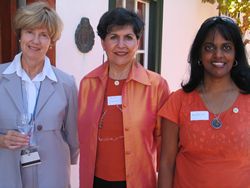 Look to men and women for your role models and be prepared to take a few knocks in your careers, Dr Jaleh Daie told members of South African Women in Science and Engineering (SAWISE) at their 2007 welcome at the leafy Welgelegen on February 27.The problems women face in academia are universal and complex, added Daie, past president of the international Association for Women in Science.

"Undoubtedly, one of the biggest problems is isolation. There are few role models and women are not groomed or mentored properly for leadership.

This is where she had concentrated her own efforts as president of the Association for Women in Science, she said.

"Get women in leadership. Things will change quicker."

Daie, formerly of the University of Wisconsin and Rutgers University, is visiting South Africa as part of PlantBio Trust's Distinguished Speaker Programme. She was also former head of science at the David and Lucille Packard Foundation, the largest foundation in the US at the time.