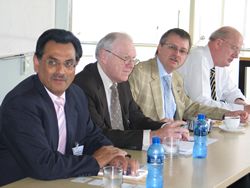 A delegation from the European Parliament visited the Institute of Infectious Disease and Molecular Medicine (IIDMM) on Wednesday, 21 February.

The delegation, hosted by Professor Iqbal Parker (head of the Division of Medical Biochemistry), was in town to meet several ministers, visit various institutions and to attend Minister Trevor Manual's Budget Speech.

Their visit, which included visits to various laboratories, came in the wake of the announcement that the University of Cape Town will host the Cape Town Component of the International Centre for Genetic Engineering and Biotechnology (ICGEB).

The ICGEB's research is expected to help the world's scientists determine the mechanisms related to infections and the resurgence of both infectious and non-infectious diseases at a molecular level. It is hoped the research will result in new drugs and vaccines in the fight against diseases such as TB, malaria and HIV/AIDS.