Seeing the wood and the trees 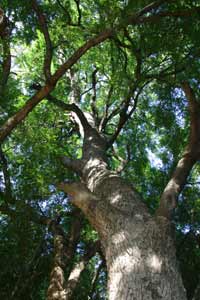 Those who think biodiversity is just a numbers game might be barking up the wrong tree.

This is according to a paper recently published in the leading journal Nature. Co-authored by UCT Smuts Fellow Felix Forest, Professor Terry Hedderson of the Department of Botany and colleagues abroad, the three-year study was conducted in South Africa's Cape region.

It set out to build the largest evolutionary tree yet for an entire flora that covers over 9 000 species '“ many of which are endangered and only found in the Cape.

"An impressive number of species, yet representing only a few clusters of closely related groups," says Hedderson.

In the paper the scientists argue that genetic variation between species is just as valuable as numbers. Variation may give invaluable insight into the means by which conservationists can save features such as medicinal and economically useful plants, even though those features may be currently unknown.

The study is a collaborative Darwin Initiative-funded project between the Royal Botanic Gardens Kew, the South African National Biodiversity Institute and UCT.