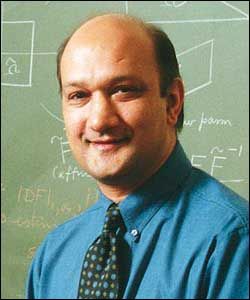 The announcement marked the conclusion of the first round of the Department of Science and Technology\'s new South African Research Chairs Initiative (SARChI), one that will attempt to reverse the country\'s decline in research output and renew and extend the country\'s scientific infrastructure base.

The former Dean of Science, Reddy is a National Research Foundation A1 researcher and the only South African scientist to belong to all four of the country\'s science academies. Reddy is heavily involved in UCT\'s Centre for Research in Computational and Applied Mechanics.

Parker heads the Division of Medical Biochemistry. The award will allow him to expand his work on oesophageal cancer, though his focus will include epidemiology and molecular biology.

De Blok, formerly of Cardiff University\'s School of Physics and Astronomy, is spearheading research on the distribution of dark matter, which comprises 95% of the universe\'s total mass. Astrophysicists have been trying to pin down the properties of dark matter, a crucial part of cosmological theories.

Philander was the Knox Taylor Professor of Geosciences at Princeton University and director of their Atmospheric and Oceanic Sciences programme. He is a specialist in ocean-atmospheric interactions and climate fluctuations, including El Nïno and La Nïna.

Shearing is Professor of Criminology and director of the Institute of Criminology in the Faculty of Law. With around 39 years\' experience as a criminologist (including a stint with the Centre of Criminology at the University of Toronto), he was a member of a multinational panel that led an inquiry into curbing violence and intimidation in the 1994 elections.