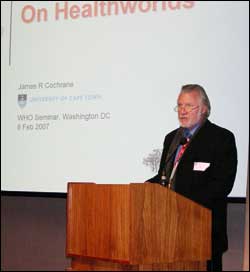 A recently released World Health Organisation (WHO) study estimates that between 30% and 70% of Africa's health infrastructure is owned by faith-based organisations, with little co-operation between these and mainstream public health programmes, hampering access to HIV prevention and treatment.

The report, released at Washington National Cathedral earlier this month, focused on Lesotho and Zambia, countries with HIV prevalence rates of 23.2% and 17%, respectively.

The report says that faith-based organisations play a much bigger role in HIV/AIDS treatment in sub-Saharan African than was previously recognised. It concludes that better co-ordination and communication are "urgently needed" between these organisations and the private and public health sectors.

"Faith-based organisations are a vital part of civil society," said Dr Kevin de Cock, director of WHO's Department of HIV/AIDS.

The WHO study was undertaken by partners in the African Religious Health Assets Programme (ARHAP) at the Universities of Cape Town, KwaZulu-Natal and the Witwatersrand and from the Rollins School of Public Health at Emory University, Atlanta.

Researchers say they are confident that their efforts have yielded the first credible data showing the extent to which faith-based organisations are providing HIV/AIDS care in Lesotho and Zambia.

"Anecdotal commentary has long pointed to the huge presence of what we call religious health assets on the ground in Africa," said UCT's Professor Jim Cochrane of the Department of Religious Studies and director of ARHAP's UCT hub.

"Through participatory GIS mapping and validation processes we have provided the first systematic evidence of their scope, scale, character, reach and importance for health systems in contexts where such systems are struggling or collapsing."

The researchers argue that health, religion and cultural norms and values define the health-seeking strategies of many Africans and the failure of health policymakers to understand the overarching influence of religion - and faith-based organisations in HIV treatment - could seriously undermine efforts to scale up health services.

"We were delighted to have the WHO, through its personnel at the Washington DC event, say that our work has set new standards for the way in which faith-based organisations need to interact with public health systems in the drive for universal access towards prevention, treatment, care, and support by the year 2010," Cochrane concluded.