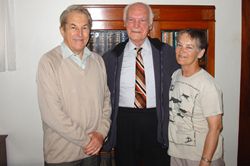 Emeritus Professor Michael Whiteman, former head of UCT's Department of Mathematics and Applied Mathematics, died on the morning of 5 February at his home in Bergvliet, aged 100.

Whiteman, who celebrated his 100th birthday on 2 November last year, lived life to the full. He was the author of six books and at the time of his birthday was busy proofreading his seventh.

Whiteman was born in London in 1906. He attended Gonville and Caius Colleges in Cambridge in the 1920s, obtaining an MA in mathematics. He came to South Africa during the 1930s, taught at Bishops for a couple of years before joining UCT. He retired in the early 1970s.

"He was a true polymath," said Associate Professor Christopher Gilmour, head of the maths department.