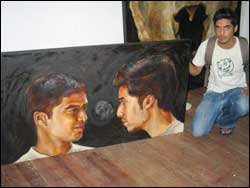 Face-to-face: Hasan Essop with fourth-year fine arts student Danielle de Kock's painting of him and his twin, Husain. The two studied fine art at Michaelis and are graduating this week, Husain in absentia. Husain is in the lighter tux in the picture on top.

They were knit together as babes, developed together, matriculated together and studied fine art together. And now, on the eve of their graduation, twin brothers and fine art graduands Hasan and Husain Essop are apart.

Hasan will pull on his hood and gown on December 15, but Husain has other ceremonial dress - the white robes of the Ihram that male pilgrims wear when they undertake the Hajj to Mecca. This is a journey Husain has made with his parents, and he will graduate in absentia, returning to the Mother City in January.

The twins matriculated from Alexander Sinton High School in Athlone, the only school in their neighbourhood that offered art, Hasan says. Besides their physical likeness, art has bound them since early childhood.

"We've always competed," Hasan said. "We drew a lot and we always wanted to see who could do the best work." Creativity is in their genes - identically. Even their parents have problems telling them apart. But Hasan has a giveaway brown mole in his right hand, like a small paint splotch.

"As twins, we don't have a lot of space apart. But we look at life differently. We have different personalities. As we've grown the differences have become more marked." Sometimes, the sameness is downright weird.

"We'll be watching a movie and we'll both move our legs in sync. Or we'll complete each other's sentences." But their visceral likes and dislikes apart, Hasan chose print making as his major and Husain photography.

"At varsity, we've created our own styles and handwriting."

Hasan is hoping his sisters will attend his graduation. At least two of his siblings will be there.