Doctors cover everything from jazz to sponges 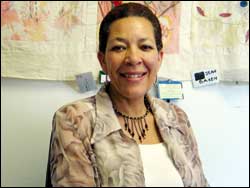 They may be outnumbered by the undergrads, but the red-garbed doctoral candidates will again take centre stage at this week's graduation ceremonies. For many, the ceremony caps a decade or more of academic studies. (The tireless among them will move on to postdoctoral work in 2007.) Here we home in, briefly, on some of the groundbreaking work these senior students and researchers have produced.

Jean Baxen of the School of Education fixed her attention over the past five years on the challenges that HIV and AIDS pose to education, focusing on teachers' understanding of the disease. That's important, as the fastest-growing infection rate, after all, is among those aged 16 to 24. "This is what piqued my interest," Baxen says. Drawing on interviews with life skills teachers in districts in Mpumalanga and the Western Cape, Baxen set out to understand and develop a framework to explain teachers' attitudes to key issues around the disease, such as the body, intimacy and sexuality. This was part of a three-year project called Schooling, Cultural Values, HIV and AIDS, funded by the National Research Foundation (NRF) and the Research Council of Norway. One PhD and five master's graduates, all supervised by Baxen, have come out of the project.

Across the world, HIV vaccines are tested using the rhesus macaque monkey, an Old World monkey that is unfortunately in short supply due to their extensive use for biomedical research. Now PhD student Gerald Chege has found that the chacma baboon, abundant in Southern Africa (you'll have spotted them around Cape Town as well), can do the job just as fine. Chege's study in the Division of Medical Virology, under the supervision of Professors Anna-Lise Williamson and Enid Shephard, was part of efforts by the UCT Vaccine Research Group to develop vaccines to protect against HIV-1 subtype C, a virus type that causes over 90% of HIV-1 infections in South Africa. With funding from the South African AIDS Vaccine Initiative (SAAVI), Chege found that the chacma baboon is a suitable non-human primate model to test these candidate vaccines and identified GagC VLP, a UCT-developed HIV-1 vaccine, as a potential candidate for Phase 1 clinical trial. Results from Chege's study with the chacma baboon compared very closely with published data from candidate HIV-1 vaccine studies using the rhesus macaque. "This indicates that our chacma baboon model is an equally good, if not better non-human primate model," says Chege.

Dr RenÃ© English of the UCT Lung Institute has shown that an integrated, symptom-and sign-based guideline for South African primary care nurses is an effective diagnostic and pre-screening tool for identifying TB and other respiratory diseases. In a 13-month study at the Retreat Community Health Centre, English compared nurses' diagnoses of a group of patients when using the Practical Approach to Lung Health in South Africa (PALSA) guideline to physicians' diagnoses of that same group using special investigations. Her data showed that nurses' diagnoses were as effective as those of the physicians. PALSA is the local adaptation of the Practical Approach to Lung Health Initiative (PAL), part of the World Health Organisation's (WHO) Stop TB Strategy. PAL aims to improve the quality and efficiency of primary care provided for patients, aged five years and older, with respiratory diseases like tuberculosis. The incidence of TB in South Africa is among the highest in the world. Yet, English says, nurses, who form the bulk of healthcare workers at a primary health care level, are not always adequately skilled or equipped to provide high-quality management. Therefore, PALSA incorporates a guideline, guideline-support materials and an in-service training programme. The PALSA guideline now also includes HIV and AIDS diagnosis and management, as well as an approach to sexually transmitted infections (STIs). It is being put into practice in the Western Cape and Free State provinces under its new name, PALSA Plus.

Equity for disabled students at higher education institutions (HEIs) depends on more than just physical access. So says Colleen Howell of the Department of Sociology in her doctoral thesis Equity, Difference and the Nature of the Academic Environment. According to Howell, disabled students must be able to participate equally in the process of teaching and learning so they can fully benefit from what higher education has to offer. This means looking more carefully at what is happening in the classroom and integrating the concerns of disabled students into strategies that address teaching and learning issues within institutions. In her cross-sectional doctoral study of 11 HEIs across South Africa, although some institutions have support services like disability units in place, people still think of disabled students as "not normal". This affects how institutions support their participation. "What is needed is a paradigm shift," Howell said. Institutions need to develop the capacity to respond at the classroom level to all forms of diversity in the student body. "This is central to a just and equitable higher education system - and therefore to questions of institutional transformation."

Andrew Lilley is a little miffed at how the "true masters" of jazz have slipped from memory as the art form takes on, well, new forms. So, for his doctoral work, Lilley, a lecturer at the South African College of Music (SACM), has gone to jazz's African-American roots. Specifically, he's dedicated his research to those jazz piano stylists who developed and polished the jazz form known as bebop, characterised by formulated improvisation, in the 1940s and 1950s. It's bebop pianists like Thelonius Monk, Bud Powell and others who, alongside giants Dizzy Gillespie and Charlie Parker, founded the "language" of jazz, says Lilley. "They are the foundation of the jazz language as we know it today." Lilley also set out to put to rest some misconceptions about some of these pioneers - no, booze and a brutal beating by police in 1945 did not spell the end of Powell's growth as a jazz pianist - and to demonstrate how the musicians influenced each other. "One can see a strong sense of tradition and how these musicians respected that tradition," he says. (Lilley was supervised by Prof James May.)

Prof Allen Rodgers will tell you that kidney stones have no single cause, and likely no single cure. "It's multi-factorial," says Rodgers, head of UCT's Kidney Stone Research Laboratory in the Department of Chemistry. He'll be glad to hear then that doctoral candidates Nontobeko Mabizela and Thokozile Lewanika have tackled the condition from different perspectives. They both started from a common point, though; the well-worn statistics that black South Africans are far less likely to develop kidney stones than their white compatriots, even though they consume more foods (anything from strawberries and spinach to beer and chocolate) high in the salt known as oxalate. When bound with calcium in the intestines, oxalate forms calcium oxalate, the building blocks of some 75% of kidney stones. In Rodgers' lab, Mabizela has shown that bikunin, a protein found in the urine, checks the build-up of calcium oxalate far better in the black population than it does in the white population. That could be because, as Mabizela found, the structure of bikunin is ever so different in the two groups. Across the road in the Department of Molecular and Cell Biology, Lewanika revealed that gut bacteria like Oxalobacter formigenes and Lactobacilli generally do a better job of breaking down oxalates in blacks than it does in whites. That means less oxalate in the urine, where kidney stones start. Then, in a year in the labs of Prof George MacFarlane at the University of Dundee, she also showed that a certain species of Lactobacillus, bacteria used in the production of yoghurt, appears to be very good at degrading oxalate. That may make it suitable for use in the prophylactic treatment of kidney stones. In time, both Mabizela's and Lewanika's studies could well save countless from the agony that's synonymous with kidney stones. (Mabizela worked under the supervision of Rodgers and Assoc Prof Ed Sturrock, while Lewanika's supervisors were Assoc Profs Shez Reid and Val Abratt.)

Talk biodiversity and the first image that springs to mind is likely that of a plant. But for her doctoral work on treatments for oesophageal cancer, Catherine Whibley has turned to another unsung treasure of biodiversity - the ocean. "Marine biodiversity is far greater than terrestrial biodiversity, so it's actually quite a good research option," she says. With colleagues at the University of Port Elizabeth and Rhodes University, Whibley, based in UCT's Division of Medical Biochemistry, has identified a number of compounds from Southern African ascidians, soft coral and sponges, that could be of possible use in the treatment of oesophageal cancer. Oesophageal cancer, the cancer of the tube connecting the mouth to the stomach, is one of the leading causes of cancer-related deaths in black males in South Africa. Whibley further characterised one group of compounds, isolated from a sea slug known as a nudibranch, to see exactly how they kill off cells. The results have been promising - the chain reaction ends in programmed cell death, a process known as apoptosis. This is preferable to the messier process known as necrosis, where cell debris often causes unforeseen side effects like inflammation. (Whibley's supervisors were Dr Denver Hendricks of UCT and Rhodes' Prof Mike Davies-Coleman.)

"The perfect crash would be no crash at all!" Always striving to perk up vehicle safety, a leading European car manufacturer once suggested the development of a flawed vehicle frame, usually made of rectangular tubes (low carbon steel or aluminium), which would make a crash safer. After crushing more than 100 steel tubes, UCT's Steeve Chung Kim Yuen says the answer is mini-pyrotechnic devices, like those used to trigger airbags.

Chung Kim Yuen, from the Blast Impact and Survivability Research Unit (BISRU), Department of Mechanical Engineering, has, under the supervision of Professor Gerald Nurick, found a way to improve the impact-absorption characteristics of a vehicle's frame. This, he believes, will reduce the impact experienced by passengers during a crash.

Chung Kim Yuen says, in application, the impact of a collision would trigger strategically placed little pockets of explosives on a vehicle's frame to create geometric and material imperfections in the frame. This would cause the vehicle to crumple in a way that best preserves the physical safety of its occupants.

"It can be used in any system that needs to absorb large amount of kinetic energy, which includes most of our transport system, even lifts in an impact event," Chung Kim Yuen said. It's convenient, too. "You can use the same mechanism that is used for airbags."