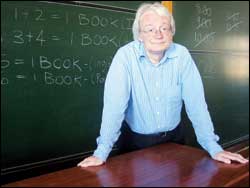 Master of mathematics: Prof Hans-Peter KÃ¼nzi, one of 24 A-rated researchers at UCT.

It was 1985 when topologist Professor Hans-Peter KÃ¼nzi first came to South Africa as a postdoctoral student. President PW Botha had created an international furore with his Rubicon Speech in Durban, and the country's future hung in the balance. Not a propitious time to come calling. But by the time KÃ¼nzi returned in 2000, there had been a sea change.

But for UCT's newest A-rated researcher, the world is home.

"Mathematics is a very international field," said the Swiss-born scholar. In 2001, he was appointed to head UCT's Topology and Category Theory Research Group, supported by research grants from the National Research Foundation (NRF). Between 2003 and 2006, the research group received additional funding as a result of a bilateral Flemish/South Africa agreement.

Certainly, the department has a strong international showing. Of the five A-rated researchers from mathematics and applied mathematics, three hail from the Northern Hemisphere: Professor George Janelidze (Georgia); Professor Igor Barashenkov (Russia) and now KÃ¼nzi, who was born in Berne and did much of his studying there.

The other A-rated researchers in the department are Emeritus Distinguished Professor George Ellis and Professor Daya Reddy.

Within the maths department, KÃ¼nzi is also convenor of the third-year courses as well as the co-ordinator of postgraduate studies in pure mathematics.

The department does attract many black postgraduates from countries north of our borders, but there is a dearth of black South African research students, as well as staff, where academic careers compete with lucrative posts in commerce and industry.

For KÃ¼nzi, the A-rating is pleasing recognition in a burgeoning international field.

"It's a practical endorsement of the 25 years of work since my PhD," he commented.

Topology (Greek topos, place, and logos, study) is an extension of geometry, exploring the nature of space, investigating both its fine and global structure. Modern topology is based on the precepts of set theory, developed by Georg Cantor in the latter part of the 19th century. It is considered one of the great unifying ideas of mathematics as topological spaces show up naturally in almost every branch of mathematics.

Briefly, KÃ¼nzi's research areas also include order, category, combinatorics and their applications in analysis and algebra, with a focus on the theory of asymmetric topology.

KÃ¼nzi obtained his MS (1978) and DPhil (1982) degrees in mathematics from the University of Berne, and conducted his initial postdoctoral studies at the Virginia Polytechnic Institute and State University. He has worked and researched at the Universities of Dijon, Auckland, Oxford, Helsinki, Blacksburg, York and Fribourg and enjoyed several stints as a Visiting Professor at the Polytechnic University of Valencia.

On sabbatical leave in 2003, KÃ¼nzi taught the block course Graph Theory, Codes and Cryptology at the Department of Computer Science at the University of Berne.

"To make data transfer reasonably reliable and secure, highly sophisticated mathematical methods have been developed in modern coding theory and cryptography," he noted.

KÃ¼nzi also takes a keen interest in academic publications. He has been a member of the editorial board of the Quaestiones Mathematicae, the journal of the South African Mathematical Society, since 1995. He recently reviewed the 526-page Encyclopaedia of General Topology (2004), edited by KP Hart, Jun-iti Nagata and JE Vaughan, a collection of 120 articles by leading topologists.

Beyond his academic career, KÃ¼nzi is also deeply interested in history, engendered by his travels to Mexico, Greece, Turkey and New Zealand. The mysterious temples and Mayan pyramids of Mexico and Guatemala have a particular attraction for him. Their architects mapped the heavens, invented the calendar we use today and evolved a writing system native to the Americas. They were also masters of mathematics.