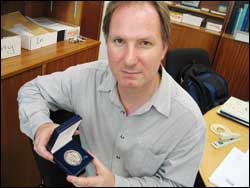 This year has seen two significant milestones for Peter Dunsby; an ad hominem promotion to full professor in the mathematics and applied mathematics department, and now the 2006 S2A3 British Association Medal (Silver), one of the highest awards to young (under 40) scientists for original research in Southern Africa.

The presentation was made in Pretoria on November 1. Dunsby was nominated by the department's Distinguished Emeritus Professor George Ellis and Professor Patricia Whitelock of the South African Astronomical Observatory.

The award is made annually in recognition of exceptional contributions to the advancement of science. A rising cosmologist, Dunsby finds himself in illustrious company. Previous winners include anthropologist Professor Phillip Tobias (1953) and psychiatrist Professor Dan Stein, head of UCT's Brain Behaviour Initiative (2001).

The S2A3 medal has not been conferred since 2002 when it went to evolutionary biologist Dr Jaco Greeff of the University of Pretoria.

Dunsby sees the award as an important endorsement.

"It's a nice feeling to be doing something that is great fun and at the same time being recognised nationally and internationally."

The launch of the South African Large Telescope in Sutherland last year and the Square Kilometre Array bid reflect a national focus on astrophysics and cosmology.

"Over the past decade there has been considerable progress in our understanding of the universe, largely due to the impact technological advances have had on observational cosmology."

The detailed understanding of cosmic microwave background anssotropies and the formation of large-scale structure, together with type Ia supernova measurements, have allowed cosmologists to constrain the basic parameters of the universe to such an extent that we now have a model that appears to fit almost all the available data - the concordance model.

"It's a description of the universe we would never have predicted 20 years ago," Dunsby notes. "Either the universe is dominated by a new form of exotic matter, known as dark energy, whose properties are a great mystery, or new physics is required to explain what we observe."

Dunsby and UCT postdoctoral student Sante Carloni are currently studying modifications to General Relativity, which could provide an alternative to dark energy.

"It's exciting to think that what we are observing might be pointing towards a breakdown of Einstein's famous theory on large scales."

He also co-ordinates the collaborative National Astrophysics and Space Science Programme, hosted at UCT and offering combined postgraduate degree programmes. It was launched in 2003 and is making an important contribution to capacity building in the space sciences.