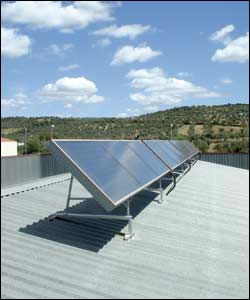 The WWF recently warned that global ecosystems face collapse by the middle of the century. The group's biannual Living Planet Report said the natural world was being degraded "at a rate unprecedented in human history". If the current cycle continued, two planets would be needed to meet global demand by 2050.

The Association of African Universities (AAU) and the United Nations Environment Programme have called on all African universities to direct their intellectual resources, teaching and curricula towards solving some of Africa's most debilitating problems.

"The solutions must be mainstreamed into our education system so that we can grow a populace that can transform Africa," AAU secretary-general Akilagpa Sawyerr said.

The call is timely. The WWF recently warned that global ecosystems face collapse by the middle of the century. The group's biannual Living Planet Report said the natural world was being degraded "at a rate unprecedented in human history". If the current cycle continued, two planets would be needed to meet global demand by 2050.

What are we doing at home? Probably not enough, say top UCT academics. Nonetheless, many have geared up to provide coherent, comprehensive approaches to sustainable development, both through their courses and teaching and via top-level, multidisciplinary projects that look at sustainable development from a macro perspective.

According to Dr Richard Hill, convenor of the MPhil programme in the Department of Environmental and Geographical Science (ENGEO), the term sustainable development was first used in the World Conservation Strategy of 1980 to mean the management of human use of the biosphere. "The focus was on the conservation of living resources or biodiversity. In 2002 at the World Summit in Johannesburg, the concept was broadened to include improvements to the immediate physical environments of the poor, by focusing on water, energy, health, agriculture and biodiversity.

"Many UCT academics are involved in research that informs this broad understanding of sustainability. But it requires an integrated approach: considering the social, economic and environmental imperatives and consequences."

One initiative at UCT is the Integrated Urban Water Management research group, with participants from anthropology, civil engineering, ENGEO and geomatics.

This group is investigating the disposal of greywater in non-sewered settlements in South Africa with a view to generating solutions that will improve the lives of people in poorly serviced households.

"Thus far the relative success of the research lies in a multi-disciplinary approach to address complex problems in which the solution lies largely in an integrated understanding of the issue, inter alia, social behaviour, structural issues, poverty, environmental impacts and technological solutions."

In the ENGEO itself, the MPhil programme in Environmental Management has produced 228 master's graduates since 1974, each with a broad understanding of major environmental and social issues and the concept of sustainable development in Africa and around the world. They're also taught to analyse and manage environmental and developmental issues, with an eye on the Southern African situation.

Recent projects have seen efforts to turn Kimberley into a solar city, making full use of the Northern Cape's abundant solar energy, and a sustainability assessment of nature conservation options for the Knersvlakte in Namaqualand, for the Botanical Society.

In chemical engineering, Dr Harro von Blottnitz has taken a strong lead to direct issues on sustainable development. Currently working with 12 postgraduate students (MSc and PhD), the group concentrates on applied research on resource transformation, both in industrial and urban contexts, from biofuels to minerals beneficiation waste.

"This work has blossomed and I have published five journal papers, with another three accepted for publication."

The group has also been invited to form the cornerstone of two new signature themes on campus: Cities in Africa and Minerals to Metals.

"These are strongly linked to problems in transportation and settlement patterns."

Urban designer Professor Vanessa Watson echoes these sentiments, saying that unprecedented rates of urbanisation in the cities of the global south, in a context of growing income inequality and disastrous environmental impacts, had placed the issue of sustainable urban development at the top of the agendas of many of the world's aid and development agencies.

"These issues are particularly pressing in the African context, linked as they are to HIV/AIDS, food security and political stability. The problem of how to respond to urbanisation and poverty in appropriate and creative ways presents a particular challenge for universities in Africa, and particularly those disciplines involved in the built environment and in urban environmental processes: planning, architecture, engineering, construction, environmental sciences, etc."

At UCT, a new Centre for Cities in Africa was established in 2006, with the aim of encouraging inter-disciplinary research around issues of urban infrastructure, governance, environment and urban cultures. The centre is based in the Faculty of Engineering & the Built Environment, but Watson says it sees itself as building a network of researchers across the university, and ultimately across Southern Africa and beyond. Linked to the centre is a new interdisciplinary master's programme: Urban Infrastructure Design and Management, which draws on support from Ove Arup to bring world-class fellows to UCT to teach in the modules.

"Underlying both the research agenda of the centre and the master's module is an assumption that we need to be far more critical of solutions to urbanisation and slums imported from the global north, and while not necessarily rejecting these ideas, making sure that they articulate far more closely with the particular needs and priorities of African urban dwellers."

Watson said research would thus focus on the interface between urban techno-managerial systems and infrastructures, and the everyday lives of a "highly diversified urban citizenry, relying as they often do on informal social and economic networks for survival".