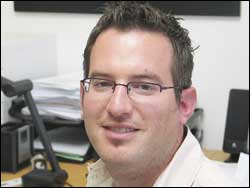 Moving up the ranks: Dr Jaco Barnard, one of the winners of this year's Fellows Awards.

UCT Fellows instituted the Fellows Award in 2005, recognising the work of upcoming young academics who have contributed to research and who have been at UCT less than five years. This year's recipients were Dr Jaco Barnard and Associate Professor Bruce Bassett.

Dr Jaco Barnard, 27, has been with the Department of Private Law for three years. His field of expertise lies in the inter-disciplinary links between politics, philosophy, economics and psychology. Barnard's work is primarily involved with jurisprudence and his interests are specifically in postmodern and poststructural theories of law.

His doctorate, which he also completed at Pretoria, focussed on legal philosophy, specifically in the area of private law's relationship with public law.

When Monday Paper spoke to Barnard, he was about to jet off to Cambridge University in England to deliver a paper at a conference on justice and reconciliation. He is also in the process of writing two books, one an elaboration of his doctoral thesis, and the other volume on big business and the Truth and Reconciliation Commission.

"My research situates law within social context, which is a very important part of democratisation," he says.

Associate Professor Bruce Bassett holds a joint position in the Department of Mathematics and Applied Mathematics and at the South African Astronomical Observatory (SAAO) as a research astronomer.

His area of speciality, dark energy, attempts to understand the recent discovery that the universe is not only expanding but also speeding up. Einstein's Theory of Relativity could come under threat as a result.

One of the uses of his research, Bassett says, is to analyse the amount of data to come out of cosmology. For example, Google searches through approximately five petabytes - each petabyte equals one quadrillion bytes - of data. New cosmological datasets will produce similar amounts of data every year.

"We need to develop techniques to automate the process," he says. "These solutions can then be applied in the real world."

Having been a researcher at a number of global institutions, including Kyoto University in Japan and the University of Portsmouth in England, he is keen to build a bridge between South Africa and the rest of the world.

Bassett is flattered by the Fellows Award.

"One of the most common laments I've heard among young lecturers and researchers is the feeling of being forgotten at the bottom," he says. "All initiatives to combat that sensation are very welcome."