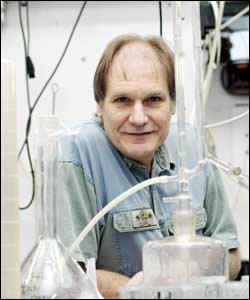 A-rated Prof George Ekama: "It's nice recognition that one's doing good, relevant, cited research. And it's an honour to be recognised by one's peers."

The rating has brought the UCT alumnus (he got his PhD in 1978) full circle. After graduating he went straight into research under the wing of the renowned Professor Gerrit Marais.

Marais was a world leader in the field of novel, integrated bio-processing and wastewater treatment and process design. And when he retired in 1992, Ekama stepped up to the plate, having served a 22-year apprenticeship on "hard ground", a "permanently temporary" research officer post in the Water Research Group (WRG) in the Department of Civil Engineering.

"Since then I've been doing what he taught me to do."

The WRG's work is mostly about developing mathematical models for simulating the chemical, physical and biological processes of wastewater treatment systems, and running experimental systems to validate these models. And in a developing country where water quality - and quantity - is paramount, necessity is the mother of invention.

One invention that cemented the group's reputation is the pioneering UCT Process, developed in the 1980s with the Council for Scientific and Industrial Research and "courageous" local authorities, those who were prepared to take risks and try new systems.

It was a world first, a method for removing nitrogen and phosphorous biologically from wastewater without adding to the salinity.

"Go to any conference on wastewater treatment and there'll be a couple of papers discussing this system," he says.

Certainly, his citation record is impressive: a total of of which 887 are to Water Science Technology papers, 735 to Water SA, 159 to Water Research, 153 to books, 108 to Water Pollution Control and 96 to other journals and reports. One of his papers has 181 citations (50 is considered a classic).

His success stems from an early start in a field that has mushroomed in the past 20 years. That early start happened because eutrophication, the growth of algal blooms in surface water, happened early in South Africa due to the limited surface water, coupled to high usage.

Ekama has remained at the forefront of development, primarily through a strong research group. He's always been a team player, preferring to remain focused on the research group's strengths.

"It's [the A-rating] essentially about the group, not about me."

"One is also able to do good research because one has good postgraduate students who are prepared to burn the midnight oil and sacrifice their time. They choose us because they think we do good research."

And then there are the stalwarts like laboratory assistant Hector Mafungwa and laboratory manager Taliep Lakay ("Mr T"), who has kept experimental systems running since Ekama's forerunner Marais started in 1967.

In the seven years under NRF review, Ekama co-supervised 13 master's students and four PhDs. Now the WRG has five PhD and seven master's students. In its lifetime, the WRG has graduated over 25 PhDs and 70 master's candidates - now found on every continent of the world, bar Antarctica.

"Only because the wastewater there is frozen and doesn't flow anywhere," he jokes.

In a developing country like South Africa, water quality is paramount and there are three main areas of concern: the lack of skills among operators of wastewater treatment plants; a lack of intervention in wastewater plants by local authorities; and the quality of surface water.

"Wastewater treatment has not kept up-to-date over the past decade. Local authorities are not implementing new technologies, battling to keep going what they've got," he commented. "It's well-legislated but under-enforced, and these issues are threatening surface water quality."