Bring relief and perspective to our heritage 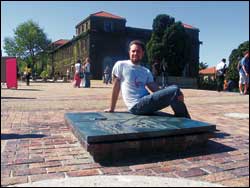 Myer Taub describes himself as a cultural activist, a dramatist, an academic, and a cultural impresario. Toss the word "heritage" into the conversation and he'll come back with a dramatic concept to re-enact and reshape the way we perceive the past, focusing on the imagination.

For the Potter Fellow, our heritage is a diverse and living thing, composed of fragments that, post 1994, need to be reassembled and stored in new visual and mental repositories.

But which heritages do we celebrate? Is there a politically correct heritage? Does one cultural heritage exclude another? How is heritage perceived? South Africans, generally, have few answers.

"Our heritage sites offer wonderful opportunities for performance and storytelling. We need to interpret that heritage."

When UCT launched the Heritage Trail in 2005 to mark the institution's 175th birthday, Taub revelled in the idea of a "symposium of site and performance", using the locales as catalysts to explore the institution's history through drama and narrative. This is what he did for his Potter Seminar (titled inHeritage), part of his commitments towards his benefactors, the David and Elaine Potter Charitable Trust.

"Each site represents an historical moment in the university's life. An exchange between site and live or animated interpretation can stimulate awareness of our heritage and provide a strategy for interactive narrative."

His interest in reworking and remoulding the past was born in New York. He was there during the 9/11 attacks and the aftermath. Watching those monolithic structures fall had a profound effect on him.

"Something shattered, and not just something American."

Taub's thesis, Lessons from the Aftermath, encapsulates his thoughts about South African society and the way we dismantle the past; and how we as a society have constructed narratives around trauma and catastrophe.

His Heritage Day seminars included speakers like Professor Anthony Jackson of the University of Manchester; Charlotte Bauer (who talked about the Sunday Times Heritage Trail); Ismail Farouk of the Hector Petersen Museum; and Lorraine Koury. Guests included a host of performance and visual artists who moved between the sites enacting and interpreting these chapters of our own history in various ways.

On a broader scale, Taub is not an advocate of destroying images and icons of the past. Would he bulldoze the statue of Louis Botha, for example? Absolutely not. (Artist Beezy Bailey once dressed the figure in Xhosa initiate's clothing) Relief and perspective are needed. He'd use a special spotlight, one that fragmented or shattered the sculpture visually, creating a new, "site-specific discourse".

"We need to transform this terrible condition we lived with for so long in an interesting, thought-provoking way. It's about transformation and assemblage. We too easily accept the American or eastern ways of dealing with heritage. There is an African way."

(Additional funders of Taub's seminar were The Arts and Culture Trust and the British Council.)