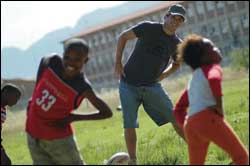 (Top to bottom) Shooting from the hip: Ryan Powter gets kids in Khayelitsha into the swing of the SHAWCO Sport project.

"Everyone knows what soccer is," says Aithne Prins, speaking specifically of the love for the "Beautiful Game" in local communities.

But as project leader of SHAWCO Sport, Prins is trying to broaden the horizons of the kids in these areas. "The whole objective of SHAWCO Sport is that we are trying to offer education through sport, and to give children from previously disadvantaged communities the opportunity to be exposed to all kinds of sports."

Launched in 2005, SHAWCO Sport operates from the Students' Health and Welfare Centres Organisation (SHAWCO) centres in Manenberg, Khayelitsha and Nyanga. UCT student volunteers go out to the townships four times a week - twice a week at each centre - and offer coaching in soccer, yes, but also hockey, netball, cricket and rugby.

Next year, they hope to up the ante by introducing swimming to the suite of sports.

The challenge, says Prins, is that the children have to be trained from scratch as many of them have never been exposed to some of the sports. As such, it is often is very difficult to keep the participants interested.

Despite this, the initiative has had surprising success, and SHAWCO has some ambitious plans for the future.

"We found that we were constantly going out and playing with the kids, and yet there were no proper incentives in place for them to be fully part of the events that we organised. So for next year, we would like to introduce incentives such as organising proper fixtures, as well as a game week at the end of each month when the groups can participate in inter-centre games."

There is also the plan to bring the groups to UCT to experience the university's facilities, which are a far cry from what they're used to in the townships.

Another goal is to start a SHAWCO team, comprised of the best players from each sporting code from all the centres. The teams will then participate in friendly matches with other schools, opening them up to the competitive experience.

The initiative not only benefits the children from the communities. SHAWCO volunteers are also gaining a lot from giving their time, particularly in acquiring leadership skills, as well as the satisfaction of being mentors and passing on their skills to others.

"I've always played sport, and I think that most of my life lessons have been learnt through sport," says Prins. "I think it's special for us to be able to teach them through this."

There are important life skills to be passed on to the kids, such as sharing and team-work: learning to "pass the ball" because you can't do it yourself, and the next person needs you just as much as you need them.

Another major challenge for SHAWCO Sport is to get local students to take part in the coaching, as the majority of volunteers are exchange students who usually leave UCT after a semester. (On the day that a photographer went out to the Khayelitsha centre, for example, three of the four students were international students - an American, a German and a Norwegian.) As a result, there is no sense of continuity, which is something that SHAWCO is trying to build through cultivating ongoing relationships between the children and their coaches.

The international students enjoy the time out with the kids, though. "I wanted to see more of South Africa than just the place where I study," says Kathrin Moormann of Germany. "And I like to work with children."

That's something all the students can agree on. There is no greater satisfaction than watching her hockey teams playing a game against each other, putting their newly learned skills to the test with such diligence and enthusiasm, says Prins.

Hopefully in the not-too-distant future, there will be a formidable SHAWCO team posing a serious threat in the schools fixtures calendar.