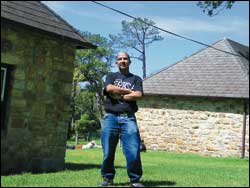 Restitution: David Wilson (geological sciences), back on his family's land in Protea Village on Kirstenbosch Drive.

Forty two years ago these words sent young David Wilson scurrying home. Back then home was one of the three landmark stone cottages on Kirstenbosch Drive, the Stegman cottages, built on land Cecil John Rhodes bought for his labour force. There, Wilson found his mother, siblings and their belongings on the back of a truck. His father was at work.

They were taken to a Manenberg Council flat, one of 100 families evicted from Protea Village. Many, like Wilson's father, were employees of Kirstenbosch and UCT. Some were sent to Heideveld, others to Lotus River, fragmenting the small but tight-knit community.

"We were used to roaming free in the forest - it was all forest then - catching trout in the Liesbeeck River and trapping squirrels to raise," Wilson recalled. "We caught and braaied doves and drank water straight from the spring.

"Manenberg was a concrete jungle for us."

But on Heritage Day on September 25, he was one of 86 families who returned to their land, 12.35ha of the 28.4ha dispossessed ground, claimed as a result of the infamous 1950 Group Areas Act. The land was officially handed back by Regional Land Claims Commissioner Beverley Jansen.

"After 12 years [of negotiation], this is the truth," Wilson said, extracting Jansen's invitation from its plastic sleeve with the same care he sections and polishes delicate slivers of rock, ceramic and bone down in his geosciences basement lab.

During the Heritage Day festivities, water was drawn from the local spring to bless the land and the people returning to it, people like 97-year old "Hatta" Frances.

Wilson has been instrumental in the community's return; first as a member of the Protea Village Action Committee and now as member of a board of trustees nominated by the community to administer and oversee the process.

He's hoping to raise funds to help people rebuild their homes. On this front, he's grateful for the help rendered by UCT colleagues like Dr John Rogers (geosciences) and Dr Richard Hill (ENGEO), who have provided professional advice on issues like drainage and soil composition.

Wilson says the trust hopes to build a retirement home for the elderly who can't afford to return. Wilson himself won't be coming home. Not yet. He and his family are settled in Grassy Park. Others, like dancer Vivian Tomlinson, who has lived in the US for many years, are returning.

After years of negotiation and planning, Wilson is overjoyed that this chapter of the story can be closed and another opened.

There are plans to bottle the local spring water and to create recreation areas for others to visit. Wilson also talks of turning one of the three stone cottages into a museum.

"We do not want to create another township. This is our heritage."