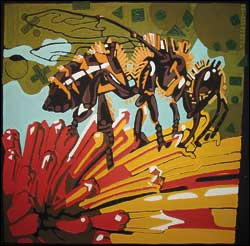 The butterfly effect is the propensity of a system to be sensitive to initial conditions. Such systems over time become unpredictable, this idea gave rise to the notion of a butterfly flapping it's wings in one area of the world, causing a tornado or some such weather event to occur in another remote area of the world."

The donation of two paintings by Shaun van der Vlugt to the zoology department was set off by the September 11 attack on the World Trade Centre. Van der Vlugt began painting in 1999 under the patronage of his sister, Anique Van der Vlugt.

For two years he built up a body of work and earned an opportunity to exhibit his work in the Papp Gallery, Manhattan, New York City.

The morning that he was to ship his work was 2001.

In his words, "It is humbling to have an exciting new career come crashing down along with the lives of people.

"I decided to give the 17 paintings that made up the exhibition as thank you gifts to salvage some good. Each painting is of an insect and a plant.

"They educate us about their productive and beneficial relationship."

He has already donated paintings to various zoology departments, from Potchefstroom University to the Gauteng Zoo Children's Centre.

On Kirstenbosch Gardens and UCT's Department of Zoology hosted a tea to honour the donation of a painting by Van der Vlugt.

Two years ago, Van der Vlugt donated two paintings to the department, which hang in the entrance hall.

"We can hope that the UCT Zoology Department, like a bee, and Kirstenbosch Gardens as a flower, will begin to work closely together towards an ecologically protected Earth." Van der Vlugt added, "Ahead of us all is our greatest challenge, the threat to the environment. Each of us can help the Earth, and one another, by doing a little good."