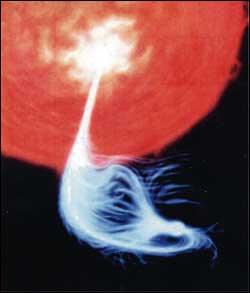 Cosmic cannibal: An artist's impression of a typical binary system: the cool red star with a stream of gas being sucked off by gravity, shown in white, drawn down to the white dwarf along a path shaped by magnetic forces. (Visual by artist Bob Watson.) News last week said the International Astronomical Union had demoted Pluto to the status of a "dwarf planet". In the new solar system, there are eight planets, at least three dwarf planets and thousands of "smaller solar system bodies", like comets and asteroids. According to the new rules, a planet must meet three criteria: it must orbit the sun, it must be big enough for gravity to squash it into a round ball, and it must have cleared other things out of the way in its orbital neighbourhood. According to a report in The New York Times, the latter measure knocks out Pluto and Xena, which orbit among the "icy wrecks" of the Kuiper Belt, and Ceres, which is in the asteroid belt. And you thought the Universe was expanding.

A set of David and Goliath stars locked in a fiery battle in the far reaches of the cosmos? An impending mother of an explosion?

The scenes may belong in the realm of science fiction, but images taken by the long-awaited South African Large Telescope (SALT), unveiled last year, show dramatic evidence of cannibalisation in an eclipsing polar binary star system.

Fiery magnetic gasses from the cool companion star are being sucked up by a voracious white dwarf, orbiting so close it's almost indistinguishable as a separate star. The white dwarf can survive this gaseous ingestion only until it is 1.4 times the mass of our own sun before exploding.

"The companion star is being mugged of its gas," principal investigator and UCT alumnus Dr Darragh O'Donoghue remarked. "The white dwarf literally grabs gas through a nozzle on the companion star." These are the energy wars being waged in the dark galaxies as we sleep, an ongoing evolution of the cosmos recorded by Sutherland's giant eye.

"In binary systems like these, the gravitational field of the compact star, in this case a white dwarf, sucks in gas from its larger companion. If instead the compact star is a black hole, the emitted radiation, especially X-rays, is one of the indirect ways we use to detect them," O' Donoghue explained to media at the recent First Science with SALT presentation at the South African Astronomical Observatory.

"It's also the way that mass builds up on compact stars until supernovae explosions blow them apart, giving us the 'Type Ia' supernovae recently used to show that the expansion of the universe is speeding up."

The compact star, or white dwarf, is one that has used up its original store of nuclear energy then shrunk to about one millionth of the volume of a star like our sun. In a polar star, this white dwarf also has a very strong magnetic field, which strongly influences how the hot gases from its relatively ordinary companion reach the white dwarf surfaces.

O'Donoghue's white dwarf is about three hundred thousand times as dense as the earth.

"A fragment of white dwarf as big as a pair of dice would weight as much as two small trucks." This gives it the intense gravitational field that sucks in material from the larger, cool star.

"Polars are the most readily accessible objects we know for studying gas accretion in strong magnetic fields, and are among the closest orbiting pair of stars we know. Both stars in their orbit would fit inside the sun."

The binary system SDSS JO15543.40+002807.2, as the star is pragmatically called (the figures indicate the binary star's latitude and longitude in the sky), was discovered in the Sloane Digital Sky Survey, primarily aimed at studying galaxies to determine the large-scale structure of the universe.

Indeed, this research uses a strength of SALT's design, rare among large telescopes: the ability to take snapshots of stars in very quick succession so that astronomers can study the rapidly changing properties of compact stars, especially as they pull in gas from their companions or surroundings.

SALT's performance is pretty stellar in this regard. Its SALTICAM camera, which can snap brightness measurements every 100 milliseconds, shows the brightness of the system as it dims quite drastically during the eclipse of the white dwarf by the companion star. The light from the gas crashing onto the magnetic poles (an effect similar to the earth's aurora borealis) of the white dwarf completely outshines the light from everything else.

"The ability to take rapid pictures gives us the edge in studying stars of this kind," O'Donoghue said.

(The full scientific details are in the first paper from SALT, accepted for publication in the peer-reviewed journal Monthly Notices of the Royal Astronomical Society. The online address is http://xxx.lanl.gov/archive/astro-ph, entry number 0607266.).