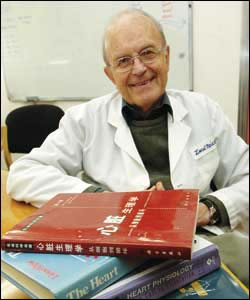 Two UCT stalwarts, Professor Johann Lutjeharms and Emeritus Professor Lionel Opie, celebrate the release of new books, both pushing the boundaries of what is known about the natural sciences.

Prof Johann Lutjeharms, of the Department of Oceanography at UCT, and Springer Publishers have released The Agulhas Current, which covers the workings of what is considered to be the major western boundary current of the southern hemisphere. The Agulhas Current plays a key role in the global ocean circulation by the way it regulates the exchange of water, heat and salt between the Indian and the Atlantic Ocean at the southern tip of Africa. "By 1970," say the publishers, "[the Agulhas Current] had become by far the least studied and the poorest understood western boundary current in the world." In the new book, Lutjeharms, a world authority on the subject, makes up for that oversight and summarises the vast body of research that has been built up since then. More than that, Lutjeharms combed over 800 publications, covering the period 1778 to the present, to give readers "an authoritative and up-to-date overview of what is currently known about the Agulhas Current system". The Agulhas Current is available from all good book shops or from Amazon.com.

Emer Prof Lionel Opie, director of the Hatter Institute for Cardiology Research, is accustomed to his textbooks cropping up in far-flung corners of the globe. But even he was impressed when he recently learned that the Chinese have released a translation of the third edition of his book, Heart Physiology: From Cell to Circulation, a back-to-basics volume on the heart and how it does what it does. Even more flattering was the Herculean effort on the part of the publishers, as it took them almost five years to complete the translation. That could be because the Chinese often had to coin new words for much of the English terminology. At other times words failed them - as in the cases of "neuromodulation", "essential myosin light chain" and "on-off" - and the original English words were added in parentheses. It would appear that Opie and his books are a hit in China, where researchers and medical personnel are slowly but eagerly adopting Western medical techniques and research. A translation of another of his books, Drugs for the Heart, will soon begin. Opie won the 1984 UCT Book Award for the first edition of Heart Physiology (once known tersely as The Heart), which is now in its fourth edition and has also been translated into Japanese. He has lectured regularly in China.