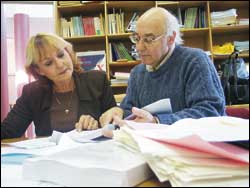 South African Jews, who number around have much more confidence in their country than they did seven years ago, despite their concern about rising crime and corruption.

This is the main finding of a 2005 survey conducted by the Kaplan Centre for Jewish Studies and Research and released this month.

The survey follows the 1998 study by The Institute for Jewish Policy Research in London, is association with the Kaplan Centre, and an earlier survey in 1991.

Summarising the main findings, centre director Professor Milton Shain noted that "the most striking thing about Jews in the new South Africa is the ongoing cohesion within the community, the strength of its communal institutions, its attachment to Israel and its confidence in South Africa".

He added: that the Jewish community "is also satisfied with their communal institutions and they appreciate the climate of religious tolerance and diversity within South Africa."

Market researcher Shirley Bruk conducted the survey, face-to-face interviews with a sample of adults from Cape Town, Durban, Pretoria and Johannesburg, where 90% of the country's Jews live.

"The study shows the South African Jews maintain a strong Jewish identity in its varying forms. Religious observance is comparatively high, particularly among the youth," she noted.

"Very few Jews are planning to leave the country. This is a dramatic shift from what emerged in the 1998 survey."

However, the survey showed that respondents were concerned about the escalation of crime and corruption.

Shain said the survey was important both for the Jewish and wider South African communities.

"It serves both academic and practical purposes and helps the Jewish community plan for its future and tracks changes and tendencies over time. It's also of interest to the government, which takes pride in the country's cultural diversity and does all it can for religious and cultural communities to flourish and feel comfortable."