Road to a car-free campus 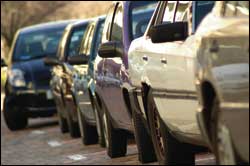 It'll drive you crazy: UCT management has a plan or two to sort out parking problems on upper campus.

Administrators will tell you that UCT's Campus Access Guide Plan has some broad objectives, notably to provide safe access - in an environmentally-friendly way - to staff, students and visitors. But even they know that for now and the foreseeable future, sorting out the parking problem on upper campus remains top of their to-do list.

Deputy vice chancellor Professor Martin Hall even suggested a headline to campus reporters at the first of two Town Hall Meetings last week, when management presented students with its proposed Campus Access Guide Plan. The attention-grabbing headline would go something along the lines of "Undergraduates can no longer park on campus after 2009".

Hall may have been joking, but that about sums up the plan. Come 2009, only students with a first degree will be allowed to park on campus. (Administrators know that the first-degree thing is going to spark plenty of debate.)

The Campus Access Guide Plan has a bigger picture in mind than just parking, of course, but no one's kidding themselves that the parking problem on upper campus and its spillover into Mowbray and Rondebosch is a growing headache. Student parking bays on campus are projected to be oversold by a ratio of 3.5:1, so they're jamming their cars into every vacant nook and cranny they can find, both on and off campus.

"The system is just not tenable," said Geoff de Wet, director of the Physical Planning Unit, at last week's meetings. "It's just not credible."

The solution on the table is multi-pronged, and includes the following:

All in all, it's projected that these steps will reduce the parking disc to parking spot ratio from the projected 3.5:1 to 1.9:1. And, as a bonus, students won't have to dodge any more cars when crossing University Avenue.

"Essentially, about 45% of students who buy discs live so close to the university they can see it," said Hall.

Administrators will now have to see if students bite. Unfortunately, only a handful attended last week's meetings and feedback will probably only flow in once Varsity hits the tarmac.