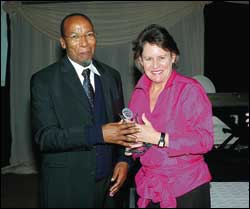 Prize-winning science: Prof Lynette Denny accepts her Distinguished Scientist Award from the Minister of Science and Technology, Mosibudi Mangena. Her work in combating the spread of cervical cancer among women in disadvantaged communities has earned her many accolades, including winner of the science and technology category of the Shoprite/Checkers/SABC2 Woman of the Year Award in 2003.

Professor of obstetrics and gynaecology Lynette Denny's research in preventing cervical cancer has scooped the 2006 Distinguished Scientist Award for Contribution to the Improvement of the Quality of Life of Women. This was announced at an awards dinner for women in science in Johannesburg recently.

The prize is one of various recognition awards created by the Department of Science and Technology to celebrate women in science and their role in improving the economic status and quality of life of South Africans.

Denny has been involved in a study on alternative methods to the Pap smear for the prevention of cervical cancer in women in low-resource settings.

Working in collaboration with Columbia University in New York, she set out to identify a test that was technologically less complex to perform, and found the answer in a cheap, readily available product: vinegar.

"We have trained about 12 nurses who have a really high ability to screen the cervix using just a bright light, cotton wool and vinegar, which is just as good as a Pap smear in detecting pre-cancerous lesions," says Denny.

Although the normal medical procedure is quick and simple for more affluent communities, it is not readily available to poor women because of the expensive infrastructure needed for the screening.

Denny and her team work out of used shipping containers at three sites around Khayelitsha, which have been converted into fully-fledged clinics for examination and treatment, showing that one does not need a great deal of cash to run such a practice.

To date, about women have been screened.

"The reason I think our research has been recognised with awards such as this, is that we have made an interesting combination of high-quality science and a community-based project that also provides a comprehensive health-care service to the women who participate in the study."

Cervical cancer is the most common cancer among women in developing countries, killing mostly those in the 40- to 50-age group. This has a devastating impact on the community and yet it is largely preventable.

On the award, Denny says: "At this time in South Africa we are very much in a culture where people are being acknowledged for good work. I'm really grateful for it, especially since it comes with a purse, which will go into my research. It is hard work being a clinician and a scientist doing community-based work, which can at times be disheartening. I think the concept of recognising people is great as it makes them feel appreciated."