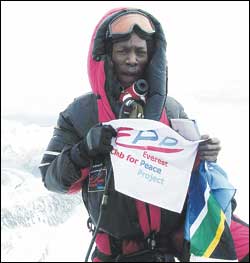 High ground: UCT graduate Sele Selamolela had a few troubles on Mount Everest, but became only the seventh South African to reach the mountain's summit.

Sele Selamolela never did any real grit-and-rope mountain climbing until he joined the UCT Mountain & Ski Club in 2001, his first year of civil engineering studies at UCT. But the bug bit, and soon he was joining more experienced members on all manner of expeditions and climbs.

"As my exposure to mountains increased, it sparked a desire to do more interesting things," he says.

Selamolela stepped things up since then, taking on Kilimanjaro, Mount Meru in Tanzania, Mount Cook in New Zealand, and Mount Aconcagua in Peru, among others.

And in May this year, he pushed the envelope even further when he and members of the Everest Peace Project, an international mountaineering organisation that pulls together people from all nationalities and faiths, reached the summit of Mount Everest, the world's highest mountain.

Selamolela was just the seventh South African to scale Everest. (And, in all likelihood, the first from the UCT Mountain & Ski Club.) Not too surprisingly, Everest stands out among all his climbs.

"It was quite tough. And I think what made it so tough was the risk involved. The risks are much more severe compared to other mountains that I've climbed."

And Selamolela had at least two hitches on the climb, both on summit day when temperatures dropped to around -30 degrees Celsius. He suffered frostbite to his right hand, and faulty equipment - a blocked oxygen pipe - could easily have proven fatal. On his way down, he experienced difficulties breathing and walking, and had to be assisted. Thankfully, someone cottoned on that the problem lay with the pipe and quickly cleared the blockage.

The trip, he says thinking back, was a watershed in his life.

"I got to learn a lot about myself - about pushing boundaries, about surviving, about perseverance."

But having climbed Everest at the tender age of 26, what new challenges does he have lined up? Nothing much, says Selamolela. His family and girlfriend would prefer him to stay off any mountains for now.