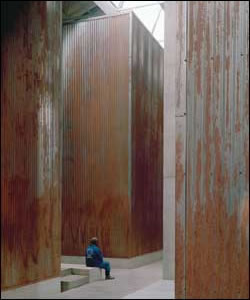 Lived memories: The Red Location Museum's memory boxes provide a space for contemplation and reflection of the past.

The Red Location Museum of the People's Struggle has been awarded the prestigious Royal Institute of British Architects (RIBA) Lubetkin Prize for the most outstanding work of architecture outside the UK and the European Union.

UCT professor Jo Noero (architecture and planning), founding partner of the Cape Town-based firm, Noero Wolff Architects, is the principal architect of the museum, which is located in New Brighton, Port Elizabeth.

Designed in industrial form, with a saw-tooth roof reminiscent of factory trade-union activity that motivated the anti-apartheid struggle, the museum houses steel containers that are tipped on end to make individual memory boxes, presenting curators with a blank canvas in which to exhibit memories and ideas.

Describing the museum as an architectural "tour de force", the judges said: "All museums concern memory and history. It was therefore all the more impressive to encounter one in which particular histories and memories have evoked an extraordinarily powerful architectural idea. The building works as both a metaphor and object - deliberately unglamorous."

It gets its name from a series of corrugated iron barrack buildings that were rusted a deep red colour. The sheds were part of a Boer concentration camp in Uitenhage and at the end of the Boer War were moved to Red Location, where they initially housed a battalion of British soldiers in 1902 before black families moved in.

It has a powerful history as a site of struggle during the apartheid years, with many prominent political and cultural leaders originating from there, including Goven Mbeki, Raymond Mhlaba, George Pemba and John Kani.

From the 1950s, the township became the focus of significant political mobilisation. The first passive resistance campaign against the pass laws was staged outside the railway station at Red Location, and the first underground UmKhonto weSizwe (MK) cell in South Africa was formed there.

In the 1990s, the City of Port Elizabeth sponsored the creation of a cultural precinct to rehabilitate the old buildings, and to also recognise the community for their commitment to the struggle.

"It is called a museum of struggle because it was a struggle," explains Noero. "It included everyone. There was an equal number of black women and children who perished in the Boer concentration camps, yet their memory was obliterated.

"When we try to collapse history into one narrative, we exclude too much. With the museum we have tried to allow as many voices as possible to be heard, and the device we used to achieve this is through the idea of the memory box."

A series of 12 mute, unmarked rusted boxes - 6m by 6m in plan and almost 12m tall - were constructed in a wide exhibition space. Each box explores a different theme of the struggle.

There is no set route to follow and the contents of each box are revealed only upon entry, requiring the visitor to make up their own story and their own interpretation.

"It's an attempt to make the museum articulate to a diverse range of people. We wanted to make this a place of disquiet and reflection where people are puzzled and drawn into finding some kind of engagement with what the museum is doing."

The concept of the memory boxes was inspired by the boxes that migrant workers used to accommodate their prized possessions from their rural families.

"I set out to try and figure out how you can construct a museum that deals with the memories of the past in a way that will be understandable to people in contemporary South Africa, rather than employ an imported Western model."

This concept is particularly relevant since many of the township's residents are unfamiliar with museums, having previously been barred from such establishments.

"It's an extraordinary building because it is built in the middle of a shack settlement, and the people who live around it and the things that it explores are all within their lived memory. Some of them are in the old photographs taken in the 80s that we enlarged to display on the panels outside the building, and these people are still there. They come to the museum and story tell among themselves about their experiences in an impromptu way, and this is the kind of engagement with local people that we wanted."

The museum beat off stiff competition from two major international Canadian museums for the Lubetkin Prize.

"And here is our little tsotsi of a building that beat them all because of its uniqueness," Noero quips.

The Red Location museum has been partnered with the new museum of World Culture in Gothenburg, Sweden, with joint exhibitions that will be shared between the two cities.

Noero concludes: "We are overwhelmed at winning this award, which is particularly important to me because Berthold Lubetkin is an architect I have always admired for his firm commitment to the ideal of merging fine form with committed social purpose, which was the primary objective of the design of our museum.