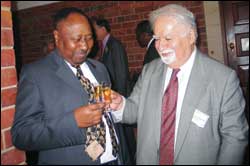 A high-level delegation from the Carnegie Foundation stopped by Smuts Hall recently to lunch with UCT students sponsored by their bursary.

The lunch, which was hosted by deputy vice-chancellor, Prof Thandabantu Nhlapo, was also attended by his fellow DVCs, Professors Cheryl de la Rey, Martin Hall and Martin West, as well as the directors from relevant departments, including Dr Jim McNamara (development and alumni affairs) and Joan Rapp (libraries).

During the lunch, the Carnegie scholars, who were mostly women, "testified" (to quote Nhlapo) on how the bursaries had presented opportunities for them to study further, thus opening doors for them to career success.

Carnegie President, Dr Vartan Gregorian, who led the delegation, said that he has always preferred supporting women students because "women sink the seeds of civilisation and continuity".

He said that the foundation continues to support Africa because the continent had demonstrated that knowledge and education are a source of liberation, and higher education plays an important role in providing leadership.

"Africa has gone through much turmoil, be it colonial, tribal, ethnic or racial," said Gregorian. "The time has come for the continent to take its own leadership role in liberation, and with it, women's education is important."

He said that universities need to keep their standards high to aspire others to study there, and that institutions such as UCT should be supported to remain excellent.

"There is nothing wrong with excellence if you are serving Africa."

He continued to say that Africa cannot remain marginalised in the age of information and that libraries are essential as a model to allow the organisation of learning.

The Carnegie Foundation has been a long-standing funder of UCT programmes, which have focused on capacity-building, especially in science and engineering, transformation and gender.