Learn the Art of Charf at the Baxter 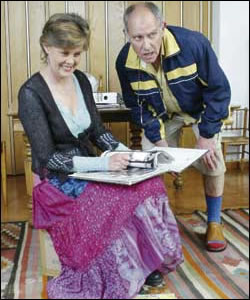 Labour of love: Wilson Dunster and Elize Cawood learn about the art of charf.

This critically-acclaimed quasi-romantic comedy is directed by Bobby Heaney.

Cawood plays Gloria van der Vyfer, an agony aunt to various Afrikaans women's magazines for longer than she cares to remember who is closing down her business. Her computer dating service has been made redundant by Internet and online chat rooms.

As she packs up the tiny office that has been home to Lady Lonely Hearts for close to 25 years, she is visited by a retired plumber. Wilson Dunster plays Cedric Tidbury, who is set on finding a date for himself.

A journey of self-discovery begins for both.

For Cedric, it is a search for love and companionship that he secretly fears may never be attainable, and for Gloria, jaded, bored, sick and tired of trotting out "quick fixes", it is a test of her resourcefulness as she finds herself face-to-face with the client from hell - an ageing alpha male who really does seem to come from Mars.

Does she really need this in her life? Can a man and a woman ever see eye-to-eye? Is there an actual art to the charf?

Heaney says, "To work with one of South Africa's top playwrights along with two of the country's top actors is indeed food for the artistic soul. Bringing Art of Charf to life with Paul, Elize and Wilson has been a labour of love that has left me freshly enriched and restored."

Cawood and Dunster have been married for 24 years and they have two children, Luke and Jenna.