Bill and Melinda Gates were here 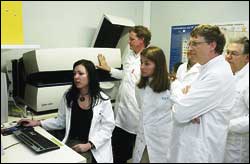 Keeping the Gateses up to date: Graduate student Andreia Soares (left) and Assoc Prof Willem Hanekom (second from left) show Melinda and Bill Gates, centre, and Jerry Sadoff (far right) the kind of studies they're conducting at the South Africa TB Vaccine Initiative Laboratories, part of the Institute for Infectious Diseases and Molecular Medicine at UCT. Bill and Melinda Gates were in South Africa to learn more about efforts to fight TB and HIV/AIDS in the country. (Picture: Sharon Farmer/Bill & Melinda Gates Foundation)

Bill and Melinda Gates are the poster couple for the battle against diseases of the developing world. Not only have they taken an interest in the headline-grabbers like HIV/AIDS, tuberculosis, malaria and lower respiratory diseases, but have also targeted a couple of lesser-known ones, including Guinea worm disease and diphtheria.

They've given billions to the cause through contributions by their Bill and Melinda Gates Foundation to the Global Fund to Fight AIDS, Tuberculosis and Malaria.

"If the Gates Foundation were a country," said Time recently, "its global-health spending in 2005 would place it just behind Finland in foreign-aid giving." (The magazine also named them, alongside rocker buddy Bono, its 2005 Persons of the Year.)

And the Gateses are not the kind to just sign the cheques and sit back. They make a point of visiting hotspots around the globe, and keeping in touch with researchers and caregivers.

The purpose of the Gates visit to the IIDMM was to hear first-hand what progress has been made in developing a new and more effective vaccine against tuberculosis (TB), which will hopefully help prevent the three million deaths and eight million new cases that occur around the world each year.

The current TB vaccine, BCG - the most widely used vaccine in the world - has changed little since it was first used in 1921. Nowadays it shows very variable effectiveness against pulmonary tuberculosis, say IIDMM researchers, although it is thought to be around 80% effective against disseminated forms of the disease such as miliary and meningitis tuberculosis, which occur predominantly in infants and young children.

In 2004, Aeras received a five-year, $82.9-million grant from the BMGF. With this money it has developed vaccines that promise to be more effective than BCG, devised strategies to ensure that all countries will have access to the new products, and set up sites where the new vaccines can be tested in phase 1-4 field trials.

The most advanced trial site is currently that started up by Hussey and the IIDMM's South African Tuberculosis Vaccine Initiative (SATVI) in the Boland region of the Western Cape, based at Brewelskloof TB Hospital in Worcester. At this site, SATVI has conducted a phase-four TB vaccine field trial involving infants, is presently enrolling into two more epidemiological cohort studies with some infants and adolescents respectively, and has completed enrolment into a phase-one trial of a novel TB vaccine, MVA85A.

The chief aim of the current clinical and epidemiological studies is to prepare the site for a phase-three efficacy trial of whichever new TB vaccine turns out to be the most promising.

"On the immunology side, work done in the SATVI laboratory contributes to our understanding of the immune response to TB as well as the BCG vaccine, and will hopefully identify an immune correlate of protection against tuberculosis that will make future TB vaccine trials that much more robust," says Hussey.

In the meeting with the BMGF delegation, Hussey, Hanekom, Dr Jerald Sadoff and Dr Tony Hawkridge did presentations on the work done, problems encountered and strategies adopted by Aeras and SATVI.

"The fund's continued support for tuberculosis research and, specifically, tuberculosis vaccine research gives us a fighting chance of finding an effective and sustainable solution to the age-old global TB scourge," says Hussey.