Beacon of light on the continent 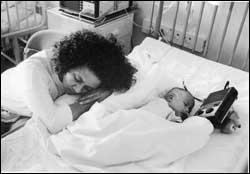 The university lauds the substantial contribution of so many staff: the highly-skilled surgeons and doctors, paramedical services, the nursing staff, as well as corps of volunteers, donors and benefactors and the community.

The arrival of 15 small polio convalescent patients on a Cape winter's day, June 18, 1956, signalled a modest beginning for a Cape institution that has become a national treasure.

The poliomyelitis epidemic of 1944 had exposed a glaring shortage of hospital beds for children in the province. The hospital's response to community needs has since then become its hallmark.

The idea of a children's hospital as a Red Cross War Memorial originated with South African troops serving in Italy at the end of WWII and first suggested at the annual general meeting of the Cape region of the South African Red Cross Society in 1945. The institution would be a living memorial to those who had served and died in the war.

Ten years in the planning, the hospital was founded in a post-war era of optimism and social reform, fuelled by rapid social and economic change. The archives of the hospital are filled with stories of young lives saved, young lives altered and young lives fulfilled. For paediatric medicine, and the children of sub-Saharan Africa, the institution has been a beacon of light and hope, but one that has also struggled for life.

"The story of the children's hospital from its conception to the present day has been one of battle - a battle not only for survival but a battle to save children's lives against HIV/AIDS, trauma and malignant disease," said Emeritus Professor Sid Cywes.

In 1946 a funding appeal was launched by the South African Red Cross' Cape region and the public rallied strongly, raising one third of the R1.6-million it would cost to build it. But the ambitious bid for a 600-bed facility was eventually whittled to 176 beds, and 10 for mothers. The financial battle has dogged the hospital's life since.

In its first year alone, patients were admitted and 42 127 outpatients treated.

For UCT historian Felicity Swanson, the hospital's most important role has been its interface between the community and sick children.

Initially, the facility was intended as a specialist, referral hospital, but from the start was inundated with patients, becoming the interface with the community at primary care level.

And while it's difficult to single out any area of care, one that does perhaps illustrate this special relationship with the community is the tracheotomy and ventilation home-care programme. Improved medical care has meant that more children are surviving in the paediatric intensive care unit. This includes a small but significant group of patients who depend on technology for their survival: ventilators that breathe for them via a hole through the throat into the windpipe. The procedure usually requires long-term hospitalisation. But the hospital now trains mothers to care for their children at home, even in the humblest shack.

David Beatty, professor of paediatrics and child health: "Today this hospital is in the unique position of being the last remaining dedicated specialist hospital for children in Southern Africa.

"It enjoys massive support from the community because of the obvious and critical role it plays in giving really sick children the best chance they have of getting better. It is also recognised for its excellent role in teaching and training.

"To continue to do this and to excel in the areas of highly specialised clinical services for children, teaching and training and research into the diseases of children in Africa, it needs the ongoing support of its partners and the government.

"As it goes into its next 50 years, the hospital and the Children's Hospital Trust have embarked on its biggest project - to completely rebuild, expand and equip to modern standards, its ageing operating theatres. This ambitious project plans to raise R50-million in the next two years."