Seasons get interesting midway into year 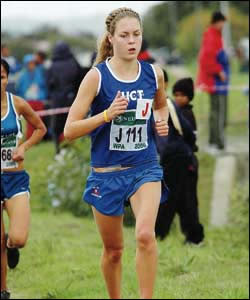 On the run: Robyn Williams.

The athletics junior team record their third win, the women's hockey team sneak ahead of Maties, and rugby loses by one point (again).

Sometimes all you need is a full team. That's what the UCT Athletics Club has discovered in the WP cross country season. For the first time in aeons, the club is fielding a women's junior side in the competition, and it's paying off. The four runners - Robyn Williams, Megan Dempster, Melody Fynn and Alexa Martin (in the order they finished) - won the third league race of the year, held on a slippery Blue Downs track on Saturday, That's also the team's third win of the season, if only because no other club can round up a full team. But don't for a moment think that the UCT foursome won't give any other (full) team a run for their money. Williams and Dempster are always among the race leaders - Dempster has a couple of road race wins under her belt - while Fynn is a 400m track specialist trying her hand at cross country. And Martin has proven very consistent so far this season, reports coach James Evans. (Another talent, Sarah Jackson, is waiting in the wings and looks a promising prospect for 2007, says Evans.) Chances are that the squad has done enough to take the league title this year, even should the likes of Liberty or Bellville enter full sides soon. In the categories where there are more teams vying for honours, UCT has also done itself proud. The senior men came third (Teboho Phooko, Nelson Bass, Marcus Knudsen, and William Robinson), while the senior women - Lauren Stewart, Unice Vorster, Amy Aronson and Nicola Collins - all finished among the top 13 runners to earn second place again, their third runners-up spot for the year. Alas, men and women's teams were both one runner short on the day. The next cross country races are at Strandfontein on June 10 and at Koeberg on

Maties has scored almost 20 goals more than them, but that hasn't stopped the UCT women's first team from nosing ahead of the University of Stellenbosch on the WP Grand Challenge log. It's all come down to bonus points so far. UCT chalked up two more in their 4-0 and 4-1 wins over Western Province Cricket Club and UCT B respectively over the past two weeks. That's five bonus points from five matches this season. And when the free-scoring Stellenbosch stuttered and missed out on a bonus point in a 3-0 win over Somerset, UCT leapfrogged them to the top of the log. (At this stage last year, UCT was already falling well off the Maties pace.) That makes UCT's clash against Somerset all the more critical - they want to keep the upper hand and again score four or more. "We've still got big games on the way and it's a long way to the finishing post," says a feet-still-on-the-ground coach, Charlie Stuart. "But it's been a nice start."

Letting down their guard five minutes too early could be what cost the FNB UCT first side a valuable win against SK Walmers on May 27. As it turns out, the team suffered their second one-point defeat of the season - the other was in the intervarsity against Stellenbosch - losing 15-16 at Green Point. UCT was nearly home and dry, leading a hardscrabble match going into the final five minutes. But that's when SK struck twice to snatch victory. The UCT defeat makes for an interesting end to the first half of the season, though. Maties lead the Super League A1 log by eight points, but have played one and two games more than, respectively, UCT and SK.